Iloilo City – As opening salvo to its 8th General Assembly, MASIPAG held a one-day conference to highlight the important and central role of small-scale farmers in the development of genuine organic agriculture. Farmer-leaders from Luzon, Visayas and Mindanao shared their experiences with MASIPAG sustainable agriculture, and how it has helped them realized food security and empowerment.

Dr. Chito Medina, National Coordinator of MASIPAG and NGO representative to the National Organic Agriculture Board, stated that the lack of “conviction” from DA itself impedes the growth of organic agriculture.

“It is sad to see that many staff of the DA, including agriculture extension workers (under LGU) are not yet convinced in organic agriculture. Even if they are convinced, the government has no substantial technologies that can be disseminated.” According to Dr. Medina, farmer-practitioners, people’s organizations and NGOs are the ones who have developed and are practicing proven organic agriculture technologies. “The organic agriculture program is negated by contrary programs of the DA like balanced fertilization, chemical farming and fertilizer subsidies, and worse, the promotion of genetically modified organisms (GMOs)”.

Dr. Medina stressed that organic agriculture can be a potent tool for rural development if organic products are geared first and foremost towards local food security.

While there are LGUs that have yet to fully implement a genuine OA program in their communities, there have also been positive partnerships with select LGUs, such as the Quezon province in Southern Luzon. 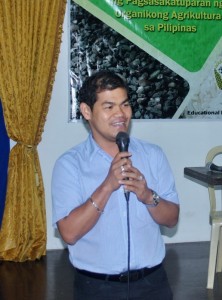 Mr. Roberto Gajo, provincial agriculturist of the Quezon province shared their experience in upholding and implementing a farmer-led organic agriculture.  The use of participatory guarantee system (PGS) in the province ensures that more small-scale producers such as the MASIPAG farmers are able to enjoy full support from the local government, which includes market access, promotion and many others.

PGS implementation in the Quezon province involves the partnership among the provincial government, MASIPAG and University of the Philippines Los Banos. Quezon has been identified as the first province in the country to adapt the PGS as a certification system of organic products.

The conference also served as venue to the launching of the “Socio-economic Impacts of Genetically Modified Corn in the Philippines,” a study on the 10-year commercialization of GM corn and its economic impacts among poor farmers.

The conference was attended by more that 150 farmers, NGO workers, representatives from the regional Department of Agriculture, as well as students, academe and media representatives.#