December 5, 2013, Quezon City – Farmer-scientist group MASIPAG was awarded the Gawad Bayani ng Kalikasan (Heroes for the Environment Award), a biennial awards event recognizing ordinary individuals and organizations that have launched notable actions and programs to defend the environment, lives and rights of the Filipino people.

According to Ms. Frances Quimpo, CEC-Philippines Executive Director, the this year’s Gawad Bayani ng Kalikasan (GBK) “honors the women and men who fought and continue to fight for the environment and for the rights of the Filipino people.” Quimpo further stated that “each of the awardees have their own distinct advocacy and initiatives but they intersect in one common objective: the realization of a safe and healthy environment for the Filipinos.”

MASIPAG was awarded as one of the organizations who have demonstrated organizational strength and unity in upholding the welfare of the people and of the environment by exemplary actions and advocacy, campaigns, education, research, technology, development, community services, mass media and cultural work. Other awardees include Kalumbay Regional Lumad Organization (Most Distinguished Awardee), Kababaihang Nagtataglay ng Bihirang Lakas (Organizational Awardee), Armin Marin, Rodne Galicha and Wilhelm Geertman (Individual Awardees).

GBK stated that MASIPAG has exemplified in its strong passion and bias for the small and resource-poor farmers, in the improvement of the farmers’ quality of life, and increasing farmers control and sustainable use of genetic and biological resources, agricultural production and associated knowledge. For more than 25 years, MASIPAG has grown not just a small biodiversity conservation project but a social movement of 563 farmers’ organizations, 47 church-based groups, 33 non-governmental organizations and 15 scientist partners. It has built partnership with 20 local government organizations pushing for organic agriculture and banning GMOs in their respective areas of jurisdiction. Recently, the MASIPAG organic standards, including its Participatory Guarantee System (MASIPAG Farmers’ Guarantee System) were recognized by the International Federation of Organic Agriculture Movement (IFOAM). 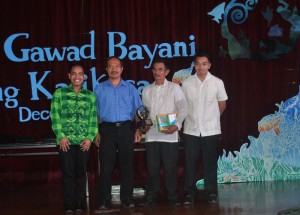 GBK cited MASIPAG’s track record in practical work in sustainable organic agriculture in the farmers’ fields, saying that the organization is highly regarded as leader among SA advocates in the country. MASIPAG was also nominated by other organizations and finally selected as the NGO representative to the National Organic Agriculture Board (NOAB), the policy making body created with the passage of the Organic Agriculture Act of 2010.

GBK in its citation said that MASIPAG is steadfast in pursuing its campaign to protect farmers’ rights to freely save, reuse and propagate seeds, and to disseminate technologies which are sustainable and controlled by farmers. MASIPAG’s dedication to the protection of farmers’ rights and the natural agro-biodiversity was put into test upon the commercialization of GMOs in the country in 2002. MASIPAG’s sincerity in its advocacy and the protection of small and resource-poor farmers’ rights was demonstrated in massive information campaigns, research on socio-economic impacts of GMOs and lobbying against the field trials and commercialization of GMOs. The network is also one of the petitioners in the filing of Writ of Kalikasan (Writ of Nature) against the field testing of Bt eggplant which was favorably supported by the Court of Appeals in its final ruling on September 20, 2013. 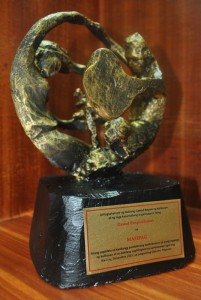