Quezon City, Philippines – Citing impending commercialization of Golden Rice, farmers and sectoral organizations here and abroad have united to stop the commercialization of the said GM crop, saying that this will decimate indigenous rice genetic diversity, and affect farmers’ rights, people’s health and the environment. In a conference that tackled Golden Rice, farmer-scientist group MASIPAG with regional networks including the Asian Peasant Coalition, Pesticide Action Network Asia Pacific (PAN-AP), GRAIN, Third World Network (TWN) and a host of national organizations also called on governments to immediately halt all planned field testing and feed tests of Golden Rice among the vulnerable population across Asia.

Golden Rice, a transgenic rice containing beta carotene is being heralded as the solution to Vitamin A deficiency (VAD). At present, it has completed the multi-location field trials in the Philippines and is now in the process of collating the data for regulatory approval. After the regulatory approval, feed testing on the people will commence. The International Rice Research Institute (IRRI) and the Philippine Rice Research Institute (PhilRice) of the Department of Agriculture are the proponents of the said project. Both institutions work to commercialize Golden Rice by 2016 or earlier. Apart from the Philippines, Golden Rice is also being field tested in contained areas in Indonesia and Bangladesh.

Farmers say NO to Golden Rice 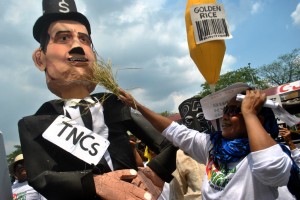 Farmer groups and sectoral organizations, however call for the prohibition of the commercialization, citing issues on rice genetic diversity loss, farmer rights, environmental effects and health impacts. “Our rights for deciding on the kind of seeds that we use, and the way we use them, are being threatened by the genetic modification of rice, our staple food here in Asia. The International Rice Research Institute, along with Syngenta, one of the world’s biggest agrochemical companies, has experimented on rice because they claim that they wanted to help the poor and malnourished children of the developing countries. They say Golden Rice is free, but Syngenta in fact owns the patents to the GM Rice. With these patents, they will be able to force farmers to pay them for planting this rice” said Diego dela Cruz Jr, a farmer and rice breeder of MASIPAG based in Agusan del Sur, Mindanao. On Earth Day, he and thousands of organic farmers in Mindanao have signed a petition urging DA Secretary Proceso Alcala to stop commercialization of Golden Rice.

Farmers from India also share the same sentiment. “Farmers in India who planted Bt cotton have suffered. They have become more indebted, in many cases leading to suicides, because of the rising cost of inputs associated with GM cotton. Pest resistance to Bt cotton has developed and farmers cannot find non-GM cotton seeds in the market. As of now, about 96% of all cotton is Bt, of which 90% is owned by Monsanto. We fear that with Golden Rice, rice farmers will face similar consequences” said Sreedevi Lakshmi Kutty of Save Our Rice Campaign India.

Similarly, farmers in Indonesia see Golden Rice as a tool for increased control of food production by transnational agribusiness. “Golden Rice is a part of a grand plan to further strengthen the control of agrochemical TNCs on food and agriculture. The United States has a big influence in the push for Golden Rice, specifically the involvement and funding of the Bill and Melinda Gates Foundation, Rockefeller Foundation and USAID. The Bill and Melinda Gates Foundation alone placed $20M to IRRI for the field testing and commercialization of Golden Rice. The foundation, on the other hand, owns $24M worth of stocks in Monsanto, also one to the biggest Agrochem TNC in the world. This puts the intent of the funders, of Golden Rice as a ‘gift to the poor’ in question” said Budianto of Aiansi Gerakan Reforma Agraria (AGRA), Indonesia. He also represents the Asian Peasants Coalition.

Sarojeni Rengam of the PAN-AP, said that the agrochemical TNCs who have been promoting deadly pesticides, are also the same companies that are pushing for the development of GMOs and Golden Rice. “The BIG 6, comprised by Monsanto, Syngenta, Bayer, Dow, Du Pont and BASF are controlling the global sale of proprietary seeds in the market. They have been supporting the promotion of GMOs. Once Golden Rice gets approved, this will also solidify the corporate ownership on seed patent. IRRI, on the other hand, is now the conduit of agrochemical TNCs, to pursue their commercial interests on the rice industry. It is not true that Golden Rice is to be used for humanitarian grounds” added Rengam.

Golden Rice is risky for health and environment

Currently, there is still lack of studies that will ensure safety of Golden Rice to health and environment. On the other hand, there exists a body of scientific literature to indicate unforeseen and unpredictable, irreversible harms to agroecosystems and human health. While there were feeding trials done among school-age children in China, these generated public anxiety about the long term potential harm to the children’s health and controversy over research ethics and biosafety rules.

Dr Debal Deb, rice conservationist and scientist in India, added that the transgenes from the GM rice are almost certain to cause genetic pollution of local rice varieties through cross pollination, with unknown ecological effects. “Errors in expression of the alien gene, especially overexpression of the gene and co-suppression of several native genes, production of hitherto unknown proteins, and unpredictable combinations of various gene products are common phenomena in GM plants, and likely to show up in Golden Rice as well. Uncertainties at the cellular and molecular level entail uncertainties in their effects on the rice ecosystem and the health of human consumers. In particular, likely production of retinoic acid and its derivatives would affect many biochemical pathways involved in embryonic development. In addition, in the event of overexpression of the beta carotene gene, people may consume excessive vitamin A, causing vitaminosis A and teratogenesis.”

Dr. Gene Nisperos of Health Alliance for Democracy (HEAD) and Dr. Deb also mentioned that availability and access to vitamin A alone cannot solve the problem of VAD. Vitamin assimilation requires adequate amount of zinc and fats in the food, and absence of water-borne enteric diseases. Thus, solving the VAD requires a holistic public health approach, instead of a magic bullet from costly technology.

Bert Autor, spokesperson of SIKWAL-GMO, an alliance of farmers and organizations against GMOs in Bicol, said that the open field testing of Golden Rice puts the health of people at risk. On August 8, 2013, more than 400 farmers and sectoral organizations stormed the gates of the Department of Agriculture Regional Field Unit 5 in Pili, Camarines Sur and uprooted the Golden Rice plants inside the 800 sqm field area. “We want to protect our rights against the contamination of our rice varieties, the health of our people and the environment. It is the plan of IRRI to contaminate our rice with the privately owned Golden Rice, making us subservient to the interests of huge corporations. The truths are, there are lots existing solutions to fight Vitamin A Deficiency. There are food sources rich in Vitamin A and are readily available. Also why not focus on giving land to the landless farmers? A lot of farmers cannot participate in increasing food security of the country as most of them do not own the land they till. We do not need Golden Rice, it is but a distraction to attaining food security and agricultural development” said Autor.

Dr. Chito Medina of the farmer-scientist group MASIPAG said that “the threat to control rice and agriculture is very real. Therefore, it is just for farmers to take action to stop the commercialization of Golden Rice. Farmers have much to lose once Golden Rice contaminates their fields. IRRI, the Agrochemical TNCs and Philrice should be held accountable to the people for deliberately exposing the people to harm, privatizing the seeds and contaminating the rice fields and environment. We should all unite to stop the commercialization of Golden Rice.”

Local farmer groups from Luzon, Visayas and Mindanao numbering to 200 individuals converged and went to the gates of the Department of Agriculture to call on Secretary Proceso Alcala to disapprove the application for Golden Rice commercialization. They also brought and ate kamote (sweet potato) which contains five times more beta carotene than Golden Rice to show the DA that there are readily available, cheap and natural sources of Vitamin A.