More than 2,000 signatures against Bt talong already sent to DA since 2011,Farmers say NO to Bt Talong! 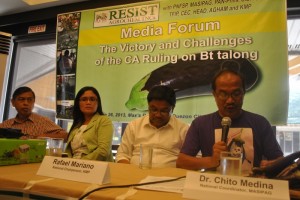 Los Baños, Laguna – In a latest move to convince the Supreme Court to side for the lifting of the Bt talong field test ban, farmer-scientist group MASIPAG called on the Supreme Court to stand by its decision saying that more farmers and consumers do not want the genetically modified crop.

In recent news, the Southeast Asian Regional Center for Graduate Study and Research in Agriculture – Biotechnology Information Center (SEARCA-BIC) in collaboration with DA, Regional Agriculture and Fishery Council (RAFC) and Asian Farmers Regional Network of Region 2, ISAAA and UPLB Bt eggplant study leaders went to Ilagan, Isabela to conduct a public dialogue with farmers and local officials. Of the 700 signatures that they have collected, about 106 came from farmers in Isabela. Earlier, the Supreme Court allowed farmers to intervene in the Bt eggplant case.

However, farmer-scientist group MASIPAG said that they have already sent copies of more than 2,000 signatures to the national office of the DA last March 14, 2011 while hundreds of farmers outside trooped to call for the stoppage of the Bt eggplant field trials back then. The original copies of the signed petition papers were given to DA Asst Secretary Romeo Recide, with farmers from MASIPAG, KMP and RESIST TNCs! witnessing the handing over of the said petition papers. The activity coincided with the World Consumer Rights Day, in which protesters called for their right to safe, affordable and nutritious food.

“For years, we have been calling on the Department of Agriculture to be impartial and objective about the issue on Bt talong. We have been talking with them, conducting dialogues and sending petitions but all of these fell into deaf ears. This is why the farmer groups and consumers had finally sought the help of the Supreme Court, as the DA is not doing its mandate to protect the people. Clearly, this move is influenced by huge multi-national companies such as Monsanto to influence the courts. We call on the court to side with the people, protect us from hungry multi-national companies and defend the right of the people to health and a healthy environment. The government must not poison its citizens.” said Carlito Seguiro, National Chairperson of MASIPAG.

Dr Chito Medina, National Coordinator of MASIPAG also said that clearly this move is to influence the Supreme Court to lift the ban against Bt talong. “Why is SEARCA involved in the promotion of Bt talong? From their acts, they are now becoming lobbyists for genetically modified crops. And clearly, this so-called public dialogue is purely hog wash. It is clear that farmers were not given balanced information about Bt eggplant, its effects and why the court decided to order cease and desist of the field trial. It is not the farmers who will benefit from the said crop, but the multi-national seed companies who will extract profits from the farmers. Take for example the situation in Bangladesh who planted Bt eggplant. They are now crying for help.”

Dr Medina cited a report made by Farida Akhter of UBINIG. According to Ms Akhter, the Bt eggplant proved to be a failure. In Bangladesh, where Bt eggplant was allowed limited commercial propagation by the government, farmers are clamoring about the poor results of the said genetically modified crop. Akhter said that “extensive crop failures were found by journalists in Bangladesh in the newer areas in the second round. Bt brinjal strains were distributed to farmers and grown again in 2015; the crops failed yet again, even more dismally, according to the United News of Bangladesh, which sent a reporter to investigate. Reporter found that the plants have either “died out prematurely or fruited very insignificantly compared to local varieties”. Spot visits to 12 brinjal fields in the districts of Manikganj, Narsingdi and Comilla over the month of February to March 2015 found hardly any living or properly fruiting plants (see “Bt brinjal turns out to be ‘upset case’ for farmers”, New Age 21 March 2015 ).”

“We hope that the Supreme Court will not be persuaded with the lies being peddled by the likes of Monsanto and its public relations front such as the ISAAA. Heed the call of the people, the thousands of people of Leyte, Iloilo and Davao who stood against the field testing of Bt talong. The governments and people of Negros and Bohol who up until now are preventing the entry of GMOs in their areas. And the countless multitude of small and resource-poor farmers who have been guarding and protecting our rich biodiversity” added Mr. Seguiro.###