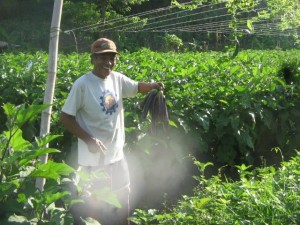 Los Baños, Laguna – After almost four years of litigation, farmers and consumers can finally have peace of mind knowing that their eggplant, commonly known as talong, will now be safe from genetic modification. Yesterday, the Supreme Court has permanently stopped the field testing of Bt talong, an eggplant variety genetically engineered to produce its own toxin. Apart from permanently stopping the field testing of Bt talong, it also declared the Department of Agriculture’s administrative order No. 8-2002 null and void resulting to a halt on the application for field testing, contained use, propagation and importation of genetically modified organisms (GMOs) pending the promulgation of a new administrative order.

“We are overjoyed on the decision of the Supreme Court to stop the field testing of Bt talong. Farmers and consumers will now have peace of mind knowing that their talong will be free from genetic alteration. This is very good news to us” said Carlito Seguiro, MASIPAG Chairperson and farmer-leader in the province of Negros Occidental. “We can now go on with our farming work, without fear that our precious vegetable will be tainted with toxins and unwanted effect from GMOs.” MASIPAG, a farmer-scientist network, is one of the petitioners that filed a Writ of Kalikasan against the field testing of Bt talong, saying that the said GM crop will affect the people’s right to a healthy and balanced ecology.

In its decision, the Supreme Court affirmed the earlier decision of the Court of Appeals Special 13th Division to stop the field testing of the said GM crop. In September 2013, the appellate court granted the Writ of Kalikasan and Continuing Mandamus against the field testing of Bt talong on the following grounds: that there is no scientific consensus on the safety and impacts of Bt talong; that there is no Congressional enactment that governs GMOs like Bt talong; precautionary principles is applicable in the light of uncertainties and inadequacy/ineffectiveness of the current regulatory system; Environmental Impact Assessment (EIA) was not conducted, and that Bt talong, with its social, economic and environmental impacts, should not be entrusted to scientists only but should involve all stakeholders.

The SC also ordered the temporary halt on the application for field testing, contained use, propagation and importation of genetically modified organisms (GMOs) saying that the DA administrative order lacked the minimum safety requirements under the National Biosafety Network (Executive Order 514).

“We laud the Supreme Court as it not only prevented the field testing of Bt talong, but it also answered our prayer to prevent the further entry and use of GMOs in our country” said Dr Chito Medina, national coordinator of MASIPAG.

“There are about 70 types of GMOs that our country is importing and is penetrating our food systems, without our knowledge or consent. Add to these the numerous new GM crops that are being field tested. It is good that the court based its decision on the importance of transparency, informed consent and the principle of precaution on untested and unwanted technologies such as GMOs. We feel vindicated that after many years of lobbying and talking about the dangers of GMOs and the inadequacy of policies, finally our voices were heard” said Dr Medina.

The DA-AO 8, which was penned in 2002, enabled agrochemical giants such as Monsanto, Syngenta and Pioneer to flood the country with genetically modified crops such as GM corn. The DA-AO is also used by multinational companies and offices such as the Philrice, IRRI and universities such as UPLB in applying for contained use and field testing of GM crops such as Golden Rice, Bt cotton, GM corn, GM Papaya and many others. At present, there are about 800,000 hectares of GM corn planted in the country and imports tons of GM food such as soya, corn and canola which are used in daily food items such as soy sauce, cooking oil, flour and many others. Petitioners also pointed that the DA AO 8 only required posting of notices which equates to conducting public information and consultation whenever GM field trials are commenced in an area. Because of its pro-biotech policy, GMO lobbyists are promoting the Philippine biosafety policy as model in the ASEAN countries.

“We can rest for now, knowing about the favorable decision on Bt talong. However, we know for sure that agrochemical giants such as Monsanto will use everything in its power to push for its agenda” added Dr Medina. Last November 24, Monsanto’s senior regional expert for scientific affairs Dr Harvey Glink gave a speech in the House of Representatives where he sought for the support of lawmakers on the adoption and use of GMOs to address food insufficiency and low yields.

Monsanto, a US-based company is now the biggest agrochemical giant in the world controlling almost a quarter of the global proprietary seed market, including GMOs. This does not include sales on other products such as pesticide, including glyphosate which is considered by the WHO as a Category 2A carcinogen. This recent act of Monsanto is paving the way for ensuring unrestriced access to the country’s seed market, which in turn will churn more profit for the company, the group said. ###