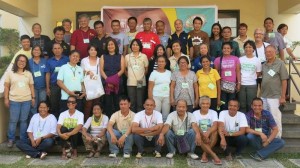 With the theme “PGS: securing market access of small organic farmers in the Philippines”, the general assembly aimed to further strengthen the alliance and inspire more organizations and local governments to take up organic agriculture and PGS.

“We are doing this assembly to consolidate ourselves and to make our voices much louder. We are here to tell the government that PGS is the way forward to make organic agriculture more viable, and encourage more small farmers to adopt organic agriculture,” said Ms Carmen Cabling, PGS Pilipinas Chairperson. To ensure consolidation and linkaging with local governments and other groups, a one-day conference was held before the general assembly. One of the objectives of the conference is to solicit more support in order for PGS to be recognized in the Philippines.

Andre Leu, the President of the International Federation of Organic Agriculture Movement (IFOAM) Organics International, expressed his support for PGS and for the group in a letter to the conference. Mr. Leu stated the importance of mainstreaming PGS, as majority of the world’s farmers, over 90%, are smallholder family farms who cannot afford the cost of 3rd party certification to sell organic products on markets.

“PGS empowers farmers and consumers to make decisions about market prices and supply that allows farmers to make a fair living and consumers to pay for the real value. Farmers can make the appropriate decisions the about guarantee system and the market that empower them as price makers rather than price takers, ensuring that farmers and their communities can break the poverty cycle and have a fair level of prosperity,” Leu wrote.

Mr Ramon Marañon, small farmer representative to the National Organic Agriculture Board who is the policy making body of OA in the country, attended the conference and discussed updates and trends in organic agriculture policy. According to Mr. Maranon, PGS is now in the pipeline of priorities of NOAB and they will seriously discuss the call since they are the body that is responsible in the amendment of the IRR of the law.

Representatives from the Bureau of Agriculture and Fisheries Standards of the Department of Agriculture, local government units and agencies, non-government organization, farmers and PGS advocates likewise participated in the conference.

The PGS Pilipinas General Assembly is part of MASIPAG’s Green Action Week activity under the theme “Organic Food and Farming for All.” The said activity was participated by representatives from the national and local government units and agencies, non-government organization, farmers and PGS advocates. ###