Today, we are remembering the Bhopal Disaster, considered as the ‘world’s worst industrial disaster.’The Union Carbide tragic gas leak claimed around 3,000 lives and left 25,000 more dead in the aftermath in Bhopal, India. Union Carbide, a pesticide plant, is a subsidiary company of Dow Chemicals. More than 30 years after, victims are still calling for justice and compensation.

In commemoration of the disaster, MASIPAG is releasing an infograph of the chemical Glyphosate, the potent ingredient in the herbicide Roundup. Glyphosate, an herbicide made by agrobiotech giant Monsanto is being used on over 700,000 hectares of herbicide-resistant genetically modified corn in the Philippines. WHO recently categorized Glyphosate as a Group 2A carcinogen.

We do not want another Bhopal-like tragedy to strike our farmers and communities! We are calling on the government to immediately halt the use of Glyphosate in our farms and protect the health of the people and environment!

Click this link for a bigger version of the infograph. 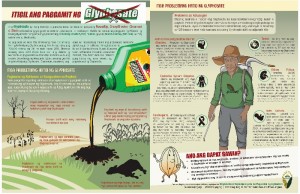