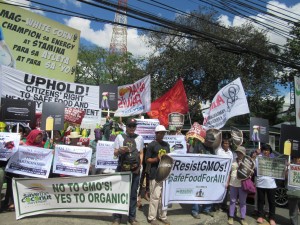 Quezon City, 23 February 2016— A multi-sector action composed of civil society groups and peoples’ organizations representing farmers, the academe, consumer rights advocates and sustainable agriculture advocates, marched today to the offices of the Department of Agriculture (DA) and the Department of Natural Resources (DENR) to demand informed, adequate and meaningful public consultations before the issuance of a set of new rules on the research, commercial cultivation and importation of genetically modified organisms (GMOs).

“We denounce the railroading of the public consultation process. There are no conclusive studies on the possible exposure to risks from GMOs as yet. The Philippine government has not even done any post-release evaluation of the impact on human and animal health, on biodiversity from GMOs, including those imported for feeds and processing into food. We lament that the government is rushing to issue new rules and is ignoring the precautionary principles[i], to the detriment of farmers, unsuspecting consumers, and other affected stakeholders,” said Sanshen R. Maglinte, spokesperson of Green Action PH.

The groups, which include ­­­­the petitioners in the writ of kalikasan against Bt talong, are calling on the government to apply the precautionary principles, which advises prudence in the absence of conclusive scientific evidence on the safety of GMOs. The groups are also questioning why the new rules are being rushed. 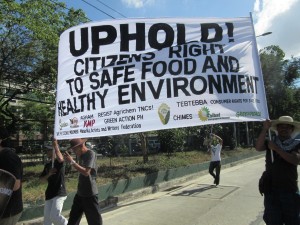 “Though it may seem that the new Joint Department Circular (JDC) involves more government departments, agencies and committees, it still didn’t go through a meaningful and substantive participation of stakeholders and the public. The DA merely had token meetings with no proper feedback mechanisms nor ample time for scrutiny. As it stands, the new rules are still missing requirements for health impact studies regulatory standards and specific duties for regulation, and mechanisms to assure the independence of regulators. In short, there are still a lot of areas which need to be clarified and substantiated,” said Kilusang Magbubukid ng Pilipinas (KMP) National Chairperson Rafael “Ka Paeng” Mariano.

Last December, the Supreme Court already affirmed the May 2013 Court of Appeals order for a permanent ban on field trials of the genetically modified eggplant, Bt talong, and the temporary ban on development of GMOs. The ban is in place only until a new ‘administrative order’.

“In spite of the potential to cause serious harm to the environment and food safety for humans and animals are unknown, the JDC continues to rely on ‘substantial equivalence’ on the presumption that GMOs are the same as its conventional counterparts. But GMOs should be studied as unique organisms because they have unique genetic make-up and characteristics not present in their natural counterparts. They require more time and scientific attention. The JDC should be able to safeguard the health and other interests of the public, so why rush it?” Leonora Lava of Greenpeace Philippines asked.

Farmers from KMP said that big agro-chemical companies and businesses with import and biosafety permits expiring this month are the ones that will benefit from the railroaded process. “Profit-oriented multinational and transnational agrochemical companies promoting GMOs, in particular U.S.-based exporters of soybean, soybean meal, feeds and fodders, coarse grains, cotton, vegetable oil and other GMOs, are the ones who will really gain from this new JDC, not the Filipino producers and consumers,” Ka Paeng added.

Farmer-scientist group MASIPAG, one of the petitioners in the case, called on the government departments to focus more on agricultural systems that will benefit the environment and provide safe and sufficient food for the Filipino people. “There is a probability that after the JDC is passed, it will be business-as-usual again for biotech companies, importers and traders in which GMOs will easily penetrate our food systems. We are thus calling on the people to protect our fragile agricultural biodiversity and the farmers’ rights to seed, land and technology. We are calling for more public consultations, as it is the people who will bear the brunt of these unwanted and untested technologies. We are calling for sustainable, environment friendly and a farmer-led agriculture to achieve safe and sufficient food for all,” said Dr. Chito Medina, National Coordinator of MASIPAG.