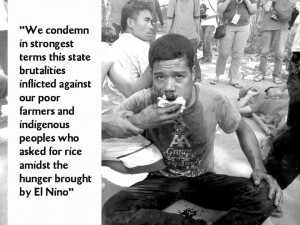 “We condemn in strongest terms this state brutalities inflicted against our poor farmers and indigenous peoples who asked for rice amidst the hunger brought by El Nino” in a statement by Leo XL Fuentes, MASIPAG Mindanao’s Regional Coordinator.

As early as January various provinces in Mindanao, including North Cotabato, declared a state of calamity as El Nino severely scorched farmlands leaving farmers without harvest or food for their families. Farmers from different municipalities of North Cotabato called for the release of 15, 000 sacks of rice and access the calamity fund to provide immediate relief for their hungry families. While it is reported that millions of pesos were available for the said calamity, these however did not reach the needy farmers.

The network also criticized the national government for its neglect and inaction, saying that as early as 2015, weather advisories have already warned about El Nino and the severe impact it may bring to the agriculture industry.

“The demand for calamity assistance and rice subsidy is more than legitimate and in fact it is the state’s duty and responsibility for its people. The consistent neglect and inaction of the local government unit and various government agencies to address the impacts of El Nino had forced the farmers to put-up a barricade in order to call the attention of the local officials” Fuentes added.

As the negotiations collapsed due to the refusal of the government to provide rice to hungry farmers, a five minute ultimatum was given by the police and subsequently dispersed the protesting farmers with water cannons and truncheons. After which, farmers heard gunshots and saw some of their companions already wounded or dead. To date, about 6,000 farmers and their families are now holed up at the United Methodist Church compound as police forces have reportedly cordoned the area.

“This only exposes how the government and its policies are detached to the plight our people. Why is it so hard for this government to provide food to our tillers in times like this? If they can fire bullets, which cost as much as a kilo of rice, why then that they cannot simply release the rice intended for calamity victims? It is with deep sadness to see state forces shooting at our hungry and needy farmers, the sector we owe for our daily food. We are calling for an impartial and independent investigation on the matter and that justice may be served to the farmers” said Fuentes.

MASIPAG also expresses its condolences to the victims and their families and solidarity to the remaining farmers that are reported to be unjustly detained in a church in Kidapawan. The network is also calling for the immediate resolution of the matter. ###