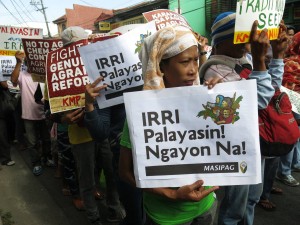 Early this July, a spate of news from pro-GMO camps (which includes IRRI and Mark Lynas) struck the headlines wherein they praised the report made by the National Academies of Sciences, Engineering and Medicine regarding safety of GM crops. According to the news, the elite panel concluded that no ‘substantiated’ evidence exists that genetically engineered crops have caused health problems in humans or damaged the environment. Alongside this is the letter by more than 100 Nobel laureates urging environmental group Greenpeace to cease and desist from its campaign against Golden Rice specifically, and crops and food improved through biotechnology in general.

It is as if the earth’s vanguards of ‘science’ has united to finally put an end to the debate on GM crops. As what Mark Lynas has said, the issue on GM crops are now been definitively put to bed.

But let us tell you our experience.

The Philippines is being hailed as the first country in Asia to have commercialized GM corn. To date, GM corn is being grown to more than 700 thousand hectares of agricultural land, more than one fourth of the total area devoted for corn. About 8 varieties of GM corn are approved for planting, which includes mainly herbicide tolerant and insect resistant varieties. Since 2003, the government has allowed the importation of more than 70 kinds of GM products for food, feed and processing. The country has also become the launching pad of IRRI’s Green Revolution, a strategy posed to curb hunger and poverty among rice growing nations in Asia. The Golden Rice Project is also housed in IRRI. Proponents have also hailed the Philipines as the country to emulate having one of the strictest biosafety regulation.

So how is the Philippines faring? We have been a net importer of rice for so many decades. The Green Revolution fostered by IRRI resulted to displacement of traditional and improved rice varieties, changed the culture of self-reliance and food security among farmers while chemical inputs poisoned the land, water and our bodies. Farmers planting GM corn have become more indebted due to high input costs coupled by low incomes. Traditional corn varieties, a staple of farming communities and indigenous groups, are now contaminated with GM corn traits. Every year, millions of liters of pesticide Glyphosate are being used and poured over hectares of GM corn farms all over the country exposing farmer communities to the carcinogen.

The Supreme Court of the Philippines, in its ruling against the field trials of Bt eggplant, said that the administrative order on GMOs failed in meeting the public participation requirement of the Cartagena Protocol and the country’s National Biosafety Framework, having all the badges of a ‘greenwash’: merely an exhibition of symbolic compliance to environmental and biosafety policy. Add to this the lack of independent health and environmental studies to ascertain safety of the GM product. Consultations to create a democratic, science-based and pro-farmer policy on GMOs was railroaded, as the country became hostage to of the import-dependent livestock industry rushing to secure imported GM soya. Proponents have, for years, been pushing for the commercialization of Golden Rice, amidst proven alternatives and interventions leading to a 22.8% decline of VAD cases from 38% in 1998 to only 15.2% cases in 2008.

Thus it should not be a surprise that farmers and consumers in the Philippines are clamoring against the continued promotion and introduction of GMOs.

It is quite ironic that the very same institutions and corporations that basically created the conditions which robbed the farmers of their primary role to produce food for the people, are now putting themselves in the position to impose solutions that will create more dependence, more hunger and poverty for the farmers. Farmers are starving and poor, not because of the lack of technologies to increase productivity, but because companies have so much control of the agriculture system that the farmers lost their ability to decide on how they will produce food. Corporate science is now being used to subdue the powerless and the disenfranchised.
While corporations are spending billions of dollars to develop new GM crops, farmers are slowly realizing their important taks to fulfill their role in securing food. They are now in the forefront of addressing issues on climate change, market-led and chemical-intensive agriculture, and neoliberal policies. Farmer-led initiatives such as breeding climate-resilient varieties, alternative marketing systems, community seed banking and diversification of food crops are far more sustainable, contributes to their empowerment, and addresses the social determinants of health.

It is no surprise that soon, IRRI and its partners in the life science industry will once again renew its push for the commercialization of Golden Rice. Which is why we need to continually engage and expose their distorted paradigm of addressing food security, in turn to also help the people decide to take the path to sustainability and food sovereignty.###