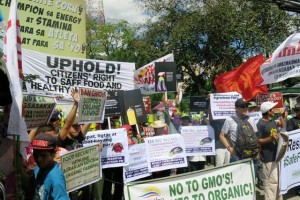 Quezon City – Farmer-scientist group MASIPAG together with RESIST Agrochem TNCs! today picketed in front of the Department of Agriculture to protest the decision of the Supreme Court reversing its earlier decision regarding the halt of Bt talong field testing. The Supreme Court reversed its earlier ruling due to ‘mootness’ of the case stemming from the expiration of the biosafety permits issued by the Department of Agriculture – Bureau of Plant Industry (DA-BPI) and the termination of Bt talong field trials which are the subject of the permits. According to Theodore Te, spokesperson of the Supreme Court (SC), the reliefs sought by the respondents are negated as there was no longer any field test to stop.

The group was surprised on the SC decision, as the issue on mootness was raised several times but was refuted by the Court of Appeals and the Supreme Court in its December 2015 decision. The SC cited arguments such as the exceptional character of the situation and the paramount public interest is involved and the case is capable of repetition yet evading review, which was the basis why the SC proceeded in its decision regarding Bt talong field trials.

While the SC said that the Bt talong proponents neither went beyond the field-testing phase nor distributed the product commercially, MASIPAG is firm that the proponents will push for another round of Bt talong field trials and commercialization in the future. MASIPAG cited the experience of farmers in Camarines Sur wherein the proponents of Golden Rice, a genetically modified rice, promised them that no further field testing will be done after two field testings last 2012. Yet in 2013, the proponents made a secretive third field testing on the said area, prompting farmers to uproot the Golden Rice field test to assert their rights to health and the environment. MASIPAG opined that in order to escape lawsuit, the Bt talong project proponents have opted to do away with future field testings while the case is being heard. Yesterday Bt talong proponent Dr Desiree Hautea, in a news article, said that they are now targeting the commercialization of Bt talong production within a year’s time.

MASIPAG also said that while the SC decided that the case is moot, the decision does conclude that Bt talong is safe. MASIPAG maintains its stand against Bt talong, and asserts that it is unsafe to consumers and the environment.

“Despite the reversal of the ruling, the court did not find the more important issues regarding the effect of the field trials of Bt talong unsubstantive. Both the Court of Appeals and the Supreme Court based its earlier decision on the precautionary principle, as the proponents did not present any compelling evidence to ascertain the safety of GM product. Substantive issues raised such as meaningful public participation, non compliance to environmental impact assessment, conflicts of interests among others are still relevant regarding future activities on GMOs” said Dr Chito Medina, National Coordinator of farmer-scientist group MASIPAG.

Core to the Supreme Court’s December 2015 decision is the application of the Precautionary Principle. The court, which has acted on evidences presented (both by the petitioners and respondents) and the current state of GMOs worldwide, finds three conditions present on the case – uncertainty, the possibility of irreversible harm and the possibility of serious harm – which warranted the application of the precautionary principle. The magistrates sees no full scientific proof, and that no clear and definite answers were presented by the respondents to warrant safety of Bt talong on people’s health and the environment.

The court also cited the non-implementation of the National Biosafety Framework in the crucial stages of risk assessment, shallow public consultation and the non-performance of Environmental Impact Assessment (EIS law) as additional compelling basis for safety. Thus the court not only based its decision on technical issues but also ventured into public policies governing GMOs, warranting the stoppage of the Bt talong field trials and nullifying the DA Administrative Order No.8 (DA AO8) as basis for approving and regulating field testing and commercialization.

“These substantive issues however were sidelined as the DA railroaded the consultation which should have been a venue to craft a new policy that will protect the constitutional rights of the people against GMOs. The DA gave in to the pressure of the livestock and feeds industry as these industries are heavily reliant on imported GM soya products” added Marcelino dela Rosa, board member of MASIPAG who attended the consultation called for by the Department of Agriculture to formulate a Joint Department Circular on GMOs to replace the DA Administrative Order Number 8 of 2002.

MASIPAG, together with sectors coming from the academe, NGOs, consumer and science groups also called on the recently appointed DA Secretary Manny Piñol to look into the matter as permits for the importation, field testing and commercialization of GM products continues despite pronouncements of the group on the adverse effects on health, environment and incomes of farmers of GMOs. “We call on the current administration to veer away from GMOs as basis for its food security and self-sufficiency programs. GMOs would only promote more corporate control in our already burdened farmers. We call on farmer-led sustainable approaches in agriculture that will provide safe and sufficient food for the people, respects the rights of the farmers and takes care of the environment” added Medina.###