MASIPAG in the News 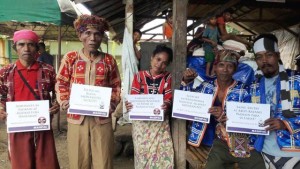 DAVAO CITY, Philippines— A local farmers group will mark the World Food Day celebration on Oct.16 with a call for climate justice.

In a news conference Thursday, Oct. 13, Masipag Regional Coordinator for Mindanao, Leo “XL” Fuentes said that in celebration of WFD, Masipag will stage a rally to denounce the continued production of crops that are genetically modified and the use of pesticides.

Masipag, farmer-led network of people’s organizations and scientists, will hold a mobilization dubbed, the People’s Tribunal Against Monsanto, this Friday, Oct. 14 at 3 p.m in Rizal Park, this city.

According to Masipag, Monsanto is responsible in polluting the environment, destroying farm lands and consequently damaging food security.

Fuentes also revealed that more than 20,000 hectares of land are planted with GMO crops in various plantations.

Citing a United Nations report, around 750 million people are hungry each day which means that “roughly one out of nine people is experiencing extreme starvation.”

In the Philippines, Fuentes said, around 56 percent of teenager based from a 2005 survey are sleeping while they are hungry.

“We cannot simply celebrate World Food Day when majority of the people in the world suffered mass poverty and hunger while our communities are made vulnerable to climate disasters by reckless and greedy chemical companies,” he said.(davaotoday.com)