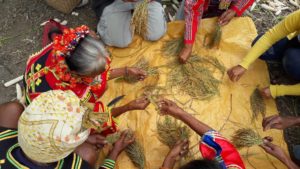 Los Baños, Laguna – Farmer-scientist group MASIPAG (Magsasaka at Siyentipiko para sa Pag-unlad ng Agrikultura) calls for the protection and respect of human rights amidst the raging war between the New People’s Army (NPA) and the Armed Forces of the Philippines (AFP) after the termination of the unilateral ceasefire of both camps. Presently, government forces are now pounding on areas in Mindanao and Luzon believed to be areas where the NPAs operate after President Rodrigo Duterte announced to the AFP to intensify operations against the longest-running communist revolution in the world.

In a statement addressed to the AFP, President Duterte ordered the military to ‘go ahead, flatten hills’ prompting government forces to use fighter jets and rockets in pursuit of the armed rebels. Reports state that several bombs are dropped in province of Compostela Valley and Abra, where unfortunately is also home for hundreds of farming families and indigenous peoples. Communities are fleeing their homes for fear of their lives, classes are suspended and some seeking medical attention. Documentation coming from the Kilusang Magbubukid ng Pilipinas (KMP) state that one farmer gets killed every three days due to heightened military campaigns.

“It is us who suffer the most during these intensified military operations. Bombs do not discriminate rebels from civilians, and these are being dropped in areas we live or where our livelihoods are situated. The lives of farmers, producers of our food, should not be a collateral damage in this war. Of the Filipino population we believe that it is us, the farming communities and indigenous peoples, who will greatly benefit if the clash between the military and the NPA ends” said Marlinda Indao, a Lumad woman farmer from Bukidnon and member of the Regional Management Team of MASIPAG in Mindanao.

The intensified military operations has also affected farming activities and livelihoods, thus worsening the already dismal state of our agriculture and contributing to further hunger and starvation of rural communities. The provision of programs and services being rendered by non-government organizations working closely with farming communities and indigenous peoples are also being affected. “The heightened military campaign will only make matters worse for the farmers, who are already burdened by the present problems on agriculture such as lack of land, loss of control on seeds and knowledge and dirt-cheap selling price of their produce” added Tranquilino Pillado Jr, farmer-leader in the province of Antique and Board of Trustees member of MASIPAG.

The network also reiterated its support on both the Government of the Republic of the Philippines (GRP) and the National Democratic Front of the Philippines (NDF) to continue the peace talks to finally address the root causes of armed struggle. “Every effort must be extended to deeply understand the problems besetting the nation and finally make terms on how we can all move forward. We in MASIPAG reiterate our stand that true development and genuine agrarian reform should cater the needs and aspirations of the small and resource-poor farmers and farm workers. Farmers should have free access and control over resources such as land, water, seeds and appropriate knowledge for them to produce food for the people. Lasting peace can only be met if we uplift the farmers’ lives and livelihood” said Cristino Panerio, National Coordinator of MASIPAG.

A fourth round of peace talk negotiations between the GRP and the NDF is scheduled on April 2-6 in Oslo, Norway.###