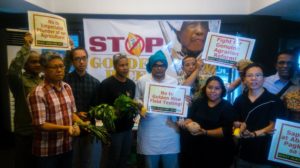 Quezon City, Philippines – Amidst the celebration of Earth Day, farmers and civil societies coming from India, Vietnam, Thailand, Indonesia and the Philippines, as well as regional organizations such as the Pesticide Action Network Asia Pacific, Asian Peasants Coalition and GRAIN, called for the utmost protection and preservation of the environment by rejecting destructive and corporate dominated technologies such as Golden rice and GM crops that are presently threatening the lives and livelihood of Asian farmers.

Applications for the field testing and direct use of Golden Rice, a genetically modified crop touted as the solution to Vitamin A deficiency, is presently filed and awaiting approval from the Department of Agriculture – Bureau of Plant Industry in the Philippines.

Asian peoples’ organizations coming from India, Vietnam, Thailand, Indonesia and the Philippines express deep concern regarding the imminent commercialization of the Golden Rice and other GM crops and its effect to their country’s food security, farmers’ livelihood and environmental health.

A recent study made by scientist in India showed that the derived lines of Golden Rice produced phenotypic abnormality and poor agronomic performance making it unfit for commercial cultivation.

Mr Cristino Panerio, National Coordinator of farmer-scientist group MASIPAG said that the study correlates on the pronouncements by IRRI regarding the status of Golden Rice on March 2014. “IRRI stated in its website last 2014 that average yield was unfortunately lower than that from comparable local varieties already preferred by farmers. It is highly likely that this inherent defect associated with the modification of the rice plant has disrupted the native structure of the rice plant making it perform less. This new information about the unintended effects of genetic modification was not detected in previous investigations.” 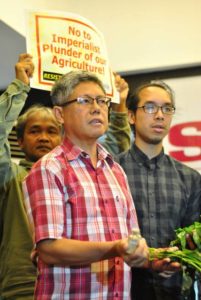 “The worst thing that could possibly happen is that the trait can transfer to other rice varieties or weedy relatives thru cross-contamination once the field testing is approved. This will prove disastrous to our already volatile rice production. The uprooting of the Golden Rice field trial by more than 400 farmers and sectoral groups last 2013 proved to be just, given the dangerous nature of the said product” said Panerio.

This has prompted farmers groups in Asia to call for the immediate halt of the said project, stating that the said GM crop would adversely affect the staple food crop of billions of people across Asia. Golden Rice patents are owned by Swiss Agrochem Syngenta, which recently merged with ChemChina a giant Agrochem corporation based in China.

Apart from Golden Rice, Asia is a huge market for the bioscience industry wherein a plethora of GM crops are being introduced or are in the process of commercialization. These GM crops have wreaked havoc among farmers wherein it brought more debts, genetic erosion, soil degradation and even suicides.

Dr Narasimha Reddy Donthi of the Pesticide Action Network India said that Bt cotton proved to be a failure in India. “Pest resistance has increased in the past decades coupled with the increase in cost of Bt cotton production. We have also observed lots of non-germinating Bt cotton seeds causing losses to farmer investments. But farmers are left with no compensation from private seed companies. These factors have led to Indian farmers taking their lives because Bt cotton failed to uplift the livelihood of the farmers.” Dr Reddy also pointed out that most biosafety protocols currently in place are under-developed and lax, even while GM proponents gloss over it. Contamination of traditional crops and food systems by under-quality GM seeds are leading to loss of genetic purity, environmental problems and health concerns.

In Vietnam, Agrochem giants Monsanto and Syngenta are enjoying gains from the country’s recent adoption of GM corn. Ms Thi Tran Lanh, Executive Director of Community Entrepreneur Development Institute (CENDI) said that GM corn are being grown in two provinces in Vietnam, with 21 more provinces doing pilot testing of the said GM crop. “It is estimated that about 1.1M hectares were planted with GM corn last 2016 in Vietnam and the forecast for this year is that Vietnam would be planting around 1.3M hectares of GM corn. It is estimated that approximately 30-50% of Vietnams’ agricultural land will be for GM crops in 2020, which is quite alarming. We must recall that Monsanto, the leading producer of GM crops, is also behind the production of Agent Orange during the Vietnam war, the consequences of which has affected many Vietnamese generations so far.”

Yesterday, five judges of the International Tribunal against Monsanto stated in their advisory opinion that the corporation “has engaged in practices which have negatively impacted the right to a healthy environment, the right to food, and the right to health” citing its widespread dissemination of dangerous agrochemicals in industrial agriculture, the introduction and release of GM crops, and introduction of persistent organic pollutants such as PCB in the environment. 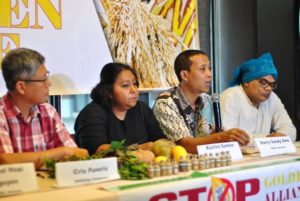 Indonesian farmers group Aliansi Gerakan Reforma Agraria (AGRA) said that the extraction of profit is what drives these corporations to exploit farmers and destroy the environment. AGRA coordinator Mr Harry Sandy Ame said that the public-private partnership program Partnership for Indonesia Sustainable Agriculture or PISAgro only led to the increase in corporate control of the Indonesia’s agriculture. “PISAgro has facilitated the corporate take-over of our agriculture, wherein corporations has divided and assigned among themselves ten high value commodities to ensure steady supply of raw products to their industry. With contract farming model of implementation, this scheme has great potential in introducing new patented seeds such as GMOs in Indonesia.” AGRA is a member of the Asian Peasants Coalition who focuses on land rights and genuine agrarian reform.

GRAIN researcher Ms Kartini Samon said that GM crops, and the enforcement of patent rights, leads to the criminalization of farmers’ culture of saving, sharing and improving seeds. “Corporations are also behind the lobbying of stricter patent enforcement in bilateral and multi-lateral free trade agreements such as RCEP, ASEAN and TPPA to ensure profit. Countries that will not adhere to these agreements are being penalized by corporations. Thus seed sharing, saving and improvement, a thousand-old tradition of farmers will be deemed illegal by these corporations.”

“When governments fail to make these agri-corporations accountable for their crimes, people’s movement proves to be the most important factor to effect change in agriculture policies. It is high time for farmers movements to strengthen and globalize resistance against the increasing corporate control in agriculture and fight for food sovereignty. We must fight the introduction of Golden Rice and other GM crops” added Panerio.

Formed in 2014 during the Asian Conference against Golden Rice, the Stop Golden Rice! Network aims to serve primarily as a platform to exchange information, support, monitor and coordinate initiatives of member organizations on the campaign against the introduction, field testing and commercialization of Golden Rice. Apart from campaigns, this network also promotes alternative farmer-led agriculture, such as sustainable and organic agriculture, seed conservation among others. #