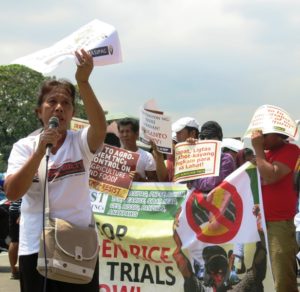 FARMERS from Bulacan, Quezon, Nueva Ecija and Southern Mindanao held a protest rally at the gates of the Department of Agriculture to denounce the prescriptive programs pushed by Secretary Emmanuel Piñol.

Around 200 protesters denounced Piñol’s programs such as the Masagana 6000 and the commercialization of genetically-modified (GM) crops.

The farmers also gathered in commemoration of the 57th anniversary of the International Rice Research Institute, the supposed leading public research agency in rice production, based in Los Baños, Laguna.

“From Masagana 99 and high-yielding varieties in the 1960s, to Masagana 6000 and Golden Rice today, it seems nothing has changed,” said Antonio Flores, a farmer from Mindanao and secretary general of the Kilusang Magbubukid ng Pilipinas.

“Both programs and technologies are prescribed to supposedly improve farmers’ production, but in reality, they merely serve to bolster corporate control in agriculture and genetic erosion,” Flores said.

The DA has announced its intended program Masagana 6000 which it said will focus on increasing rice yields to 6000 kilos per hectare through the use of hybrid rice.

The program also supposedly aims to address the improvement of seed quality, conversion of farmers from traditional farming to high-yielding hybrid rice seeds, lack of irrigation, and lack of fertilizers.

Loan programs will also be promoted so that farmers can have the financing to buy off external inputs supplied by huge agrochemical corporations.

“This is reminiscent of the Masagana 99 program instituted in the 1960s,” said Cris Panerio, national coordinator of MASIPAG (Farmer and Scientist Partnership for Development).

“The program, under the Green Revolution made use of high-yielding varieties (HYVs) developed by IRRI, and introduced a package of technology with seeds, chemical inputs and loans,” said Panerio.

“History, however, have shown that any benefits from the program were short-term, and that the MASAGANA 99, the HYVs and IRRI all have failed their promises of better production,” said Virginia Nazareno, a farmer from Infanta, Quezon.

“The seeds and the fertilizers are too expensive for poor farmers like us, that we become buried in too much debt while our yields began to decline because of the failure of the HYVs,” said Nazareno.

“Monocropping of the HYVs exposed the rice plants to various harmful pests while the excessive use of chemical fertilizers have stripped off the soils of its nutrients essential to plant growth,” added Panerio.

“The numerous traditional rice varieties that farmers have cultivated for generations were also lost, because IRRI and the government then only prescribed the use of a few IRRI rice varieties,” said Panerio.

Aside from Masagana 6000, the production and commercialization of Golden Rice is also being revived.

The genetically modified rice was developed by IRRI to supposedly address Vitamin A Deficiency (VAD) in poor and developing countries, including the Philippines. IRRI, along with DA and the Philippine Rice Research Institute (Philrice) conducted five multi-location field trials back in 2011 in preparation for its commercialization in 2014.

In 2013, more than 400 farmers uprooted the Golden Rice field trials in Pili, Camarines Sur as the calls to ascertain safety to peoples’ health and the environment remained unheeded by IRRI.

“The farmers’ uprooting and continued resistance is justified, especially now in the light of new findings on Golden Rice which shows the weakness of the technology, the brunt of which will be shouldered by the farmers,” said Sharl Lopez, Executive Director of Philippine Network of Food Security Programmes (PNFSP).

“Recent studies found out that the Golden Rice have unintended effects when the gene constructs affected the plant’s own genes which now affects the plant’s growth,” Lopez said.

Lopez is referring to the study released by Test Biotech which states that the samples of Golden Rice were found to have lower yields due to the ‘substantial reduction’ of chlorophyll in the rice plants. This increases the contamination threats to other rice varieties and might have other unintended environmental effects. 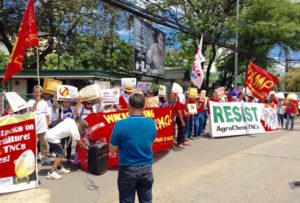 “IRRI’s rice science and technology program has only contributed in aggravating the state of food insecurity and agricultural underdevelopment in the Philippines and other Third World countries,” said Finsa Cosico, secretary-general of AGHAM (Advocates of Science and Technology for the People).

“IRRI has become an active agent in reconfiguring world rice production consistently in accordance with the predatory profit motives of multinational corporations and the general political and economic imperatives of imperialist powers,” Cosico added.

“Small-scale farmers have developed initiatives and alternatives that embody a farmer-led and farmer-centered agricultural system that not only ensures food security, but also resists the control of agrochemical corporations,” said Nazareno.

“Masipag farmers for instance, have developed, improved and shared traditional and farmers’ rice varieties which are better suited to the farmers’ needs and farm conditions. The practice of diversified farming and local innovations save the farmers from buying synthetic fertilizers and pesticides.”

Flores added that, “prior to IRRI, farmers were growing more than 100,000 varieties of rice. Unfortunately, IRRIs technologies have disregarded the local wisdom, traditional knowledge and innovation of rice farmers accumulated over centuries. IRRI’s technologies and DA’s programs are doomed to fail because they are designed for profits and does not address the root of the farmers’ problems, and that is landlessness.”

“We must push for genuine agrarian reform where farmers will have control over the land, and other necessary resources for food production,” Flores added.

“IRRI’s Green and Gene Revolution failed because they do not serve the interests of the farmers; rather it served to perpetuate the systemic exploitation and oppression of the toiling masses,” said Flores.

“What we need is a true social revolution like the Great October Socialist Revolution of 1917, which served to emancipate the workers and peasants that also proved to the world the possibility of socialist development in agriculture, industry and other human spheres,” Flores said.

Flores said the mass action in front of DA will be followed by a public forum on the impacts of monopoly capitalists to the agriculture sector titled “Going Against the Grain: Resisting the Neoliberal Attacks on Agriculture and the Way Forward to a Food-Secure Future.”

KMP said the forum will also highlight how the peasant sector, through decades of monopoly capitalist onslaught and feudal and semifeudal exploitation, effectively harnesses its collective and militant strength in asserting its democratic rights and in struggling for genuine land reform and national industrialization.

The forum will be held from 1 p.m. to 5 p.m. at the SOLAIR Auditorium in UP Diliman, Quezon City.#