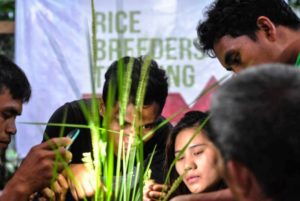 Davao City – MASIPAG successfully concluded a rice breeding training among its members and partners to further step up the initiatives for food security and assert farmers’ control over genetic resources.

“We borrowed what we know about rice breeding from Ka Pecs, we are just here to share it to you,” says Berbardo M. Portillo, an experienced rice breeder from Surigao del sur, as he shared his expectations for the rice breeders training.

Perfecto “Ka Pecs” Vicente – one of Masipag’s pillars, was well cherished by those who knew him and was loved by those who share his passion for uplifting the lives of resource poor farmers. His most ardent admirers are the farmers he trained in rice breeding, Bernardo one of them. 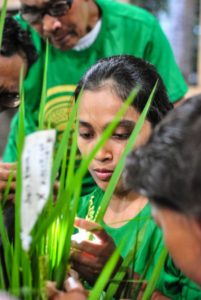 “We are blessed to have with us the trainers who were trained by Ka Pecs himself,” says Lucille Ortiz referring to the trainers, one of them is Precila “Diday” Gomez, who brought with her the actual visual aides used by Ka Pecs.

“He would be so proud” adds Ortiz.

The training participants, fifteen all in all, are Masipag farmers, representatives of partner institutions and local governments who have successfully established trial farms in their respective localities. Their rice farms are under various stages of development, some of which are on the cusp of mass production.

“We are happy to be attending this training,” says Marelyn of Bunga Coconut Farmers Association of Lanuza Surigao Del Sur. She says that the breeding techniques taught during that training would be a valuable tool for them to develop and improve the genetic qualities of their rice stocks so that they would no longer pay huge sums of money for hybrid varieties peddled to them by traders.

“This is a huge breakthrough for Mindanao,” exclaims Leo XL Fuentes, Mindanao’s Regional Coordinator. “This is the first time that we, as the new Masipag Mindanao will be having this training,” he adds. “This training would not have been made possible if not for the farmers who have painstakingly endured the hardships of Masipag’s organization problems and persevered in their collective efforts to establish their trial farms,” Fuentes adds.

Fuentes shares that providing farmers with the ability to bring greater genetic diversity to their rice stocks through participatory rice breeding could offer significant layers of protection against genetic erosion and ultimately against climate change as farmers can now improve rice traits which are more responsive to various climatic conditions such as drought, flood and salinity.

“Being dubbed as the food basket of the country, Mindanao’s agricultural economy would greatly benefit from farmers who are empowered, driven and have a high technical competence as it charts a more sustainable future moving forward,” Fuentes adds.

Farmer-led rice breeding has been one of the core programs of MASIPAG. Through rice breeding, farmers are able to exercise their control over the genetic resources they use in their farms. As of 2016, MASIPAG has a total collection of 506 farmer-bred rice and around 70 farmer rice breeders.

For more photos of the training, check out MASIPAG in Mindanao’s Facebook page. #