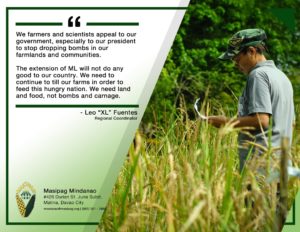 The extension of Martial Law (ML) in Mindanao is a brazen attack against the Filipino people especially the Moro and the Lumad farmers across our island. While the Duterte administration insists that this will end terrorism, the Moro and the Lumads in the grassroots are much terrorized by state sponsored aerial bombardments, harassments and arbitrary arrests of farmer leaders.

Prior to the declaration of Martial Law in Mindanao, human rights abuses are being wantonly carried out by state forces and paramilitary troops. After the declaration of ML, more abuses have been documented. Even MASIPAG member People’s Organizations (POs) experienced state terrorism first hand.

In Compostela Valley Province, four farmer-leaders of Compostela Farmers Association (CFA) and a driver were arbitrarily arrested and charged with trumped up cases. In Monkayo town, officers of Monkayo Farmers Association (MoFA) were held by an army unit, but were fortunately released hours after intimidation. In Bukidnon and North Cotabato provinces, at least six member POs of MASIPAG experienced restrictions to attend to their farm.

Even in Davao City, since March this year, aerial bombardments caused series of evacuation in the communities of Marilog and Calinan Districts that affected at least three of our member POs.

The series of mass evacuations resulted not just displacement of people but also displacements of their livelihood. Since the Martial Law declaration, the frequent evacuation have disrupted farm activities and decimated important farm resources such as livestock. Their farmlands start to become barren when they are unable to tend them, as military and militia men restrict the movements of the farmers. Many communities remain in military hamlet.

Today, as the president delivers his second State of the Nation Address, we farmers and scientists appeal to our government, especially to our president to stop dropping bombs in our farmlands and communities. The extension of ML will not do any good to our country. We need to continue to till our farms in order to feed this hungry nation. We need land and food, not bombs and carnage.#