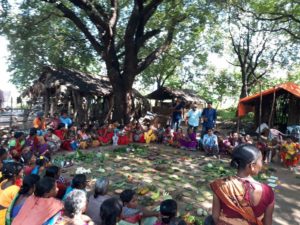 Odisha, India – Members of the Stop Golden Rice Network held a learning exchange visit in India to learn about traditional rice conservation, indigenous knowledge systems and sustainable agricultural practices such as agro-ecology and organic agriculture. The participants included farmers and NGO staff from the Philippines, Indonesia, India and Bangladesh.

One of the highlights of the activity was the field visit to Amunda Village among the Seed Mothers. The small village have traditionally practiced seed exchange, seed conservation and sustainable agriculture led mainly by women, known as seed mothers.

Seed mothers are designated by the tribe as the community’s seed keepers. They are depositories of rich agricultural biodiversity knowledge. They also facilitate village meetings to plan and ensure the success of annual seed exchanges within and among various villages.

One seed mother leads the seed and biodiversity conservation of 10 to 15 villages.

The small village of Amunda comprised of 53 households and has more than 30 rice varities, 50 kinds of millets/pulses, hundreds of vegetables and rootcrops which are grown thru out the year. The grids made by farmers is a biodiversity map representing crops harvested in a specific season. Seeds are also seen as sacred among the community. As one seed mother has said, ” seeds are the gifts of the Gods and not from you”.

This gathering is part of strengthening the ranks of small farmers and consumers in their fight to preserve and protect traditional varieties, to uphold farmers right to seeds and stop the introduction of genetically modified crops, specifically Golden Rice in their farms.

Click the link to our Facebook photo album to see more of the colorful and abundant seed collections of the Seed Mothers. #