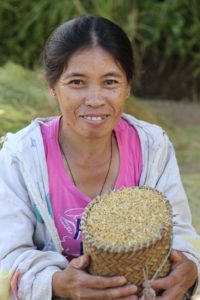 As governments all over the world commemorate World Food Day, we the Magsasaka at Siyentipiko para sa Pag-unlad ng Agrikutlura (MASIPAG) is in solidarity with millions of Filipino farmers that are currently suffering from persistent hunger and malnutrition.

Amidst a world of plenty brought by increased food production, farmers and their families continue to suffer chronic hunger due to the commodified, market-driven and industrialized agriculture system. Based on recent data, about 11.3 million Filipinos are undernourished (FAO, The State of Food Security in the World, 2014). In the first quarter of 2016, 13.7 percent or 3.1 million Filipino families experienced hunger (SWS survey). Add to this the increasing rate of malnutrition among children aged 0-2 years, which is said to be the worst chronic malnutrition in the last 10 years according to the 2015 Updating of the Nutritional Status of Filipino Children study done by the FNRI.

In stark contrast, food insecurity is high in food producing areas, specifically among the farming sector. Farmers are obliged to sell most of their produce, which includes food supposedly allotted for the family’s consumption, in order to purchase costly seeds and chemicals being peddled by huge agrochemical companies. Farmer-saved seeds, which are supposedly free and sustainable, are seen as competition to privately-owned seeds. Private ownership of seeds is further strengthened by unfair trade agreements such as the Regional Comprehensive Economic Partnership (RCEP) which will force member countries to adopt UPOV of 1991, making seed-saving practices a criminal act. Add to this the cheap imported agricultural products being dumped in our country directly competing with our farmers’ produce.

While the long term solution to problems on malnutrition is increasing food diversity, sustainable food production and addressing landlessness and poverty, the government and its institution such as PhilRice instead pushes for the adoption of genetically modified crops such as Golden Rice as a band-aid solution to the prevailing problem Vitamin A deficiency. Golden Rice, a Syngenta-owned genetically modified rice touted as an answer to Vitamin A deficiency, is but a distraction to the farmers and people’s call for safe, sufficient and affordable food.

In spite of these challenges, small farmers are now slowly rediscovering their wealth and strength overshadowed by promises of good harvest and income being peddled by corporations. Thru sustainable food production and farmer empowerment, farmers are gaining more control over their resources, knowledge and production.

Safe, Sustainable and Affordable Food for All!

No to Corporate Control in Agriculture!
No to GMOs! No to Golden Rice!