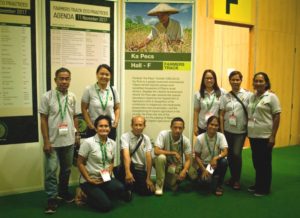 Greater Noida, India – Organic farming associations the world over joined the 19th IFOAM Organic World Congress (OWC), where significant policy issues as well as organizational matters were discussed. Ten MASIPAG farmers and staff actively participated in the OWC, as well as the various pre-conferences by different self-organized structures such as the General Assembly of the Intercontinental Network of Organic Farmers Organizations (INOFO).

The Intercontinental Network of Organic Farmers Organization(INOFO) is the infra-structure belonging specifically to organic farmers organizations all over the globe. INOFO was created to give farmers a louder voice in the global 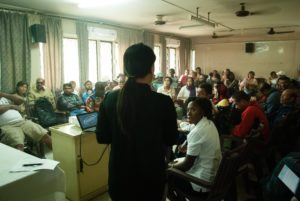 platform to influence decision making and policy change. MASIPAG has been a part of INOFO since 2014 as the Southeast Asia Convenor and Secretary and was again elected this year. Mrs. Virginia Nazareno, Masipag farmer from Quezon province was selected to become one of the conveners of INOFO for Southeast Asia. Mrs. Nazareno, or Nay Virgie as she is most fondly known,is a farmer-leader from Kiday Community Farmers Association (KCFA) in Gen. Nakar, Quezon. As convenor, MASIPAG will be playing a key role in strengthening partnership and communication among the organic farmers organizations in Southeast Asia.

From November 9-11, the Organic World Congress (OWC) was held at the Indian Exposition Mart. The colorful event commenced with Seeds Festival which featured a wide diversity of local seeds of rice, maize, wheat, millet, vegetables, cotton and many others. Six MASIPAG farmers shared their experiences and practices on organic and sustainable farming, which were widely lauded by the other participants in the congress. Weng Buena, PGS Coordinator of MASIPAG shared the Philippines’ experience in PGS and how various organizations and even local governments are working together to further develop PGS in the country.

The IFOAM GA serves to provide organizational updates on membership, policy discussion such as organic standards, and discussion on PGS regulations. Members, which include MASIPAG, are entitled to vote on new policies, resolutions, election of World Board members and other important matters. 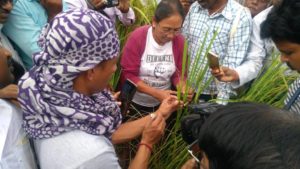 After the IFOAM activities, MASIPAG travelled to Kolkata for a workshop organized by SWISSAID, SWISSAID-India at DRCSC, a local NGO. During the workshop, Nay Virgie, along with the MASIPAG staff, demonstrated how to breed rice among the participants which come from India, Tanzania, Myanmar and Switzerland. The two-day workshop was productive and resulted to possible partnership and collaboration among the partner organizations of SWISSAID.

Overall, the activities held in India have been productive and positive — MASIPAG farmers and their practices inspired other delegates from different places, and also served to boost the morale of the farmers. The positive response of other farmers and their organizations to MASIPAG reaffirms the soundness of farmer-led strategies and farmer empowerment in achieving food security and food sovereignty.

Check out more photos during the 19th OWC here and here.