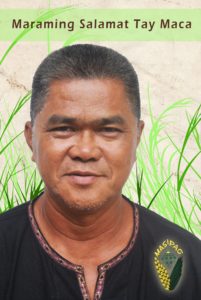 Born in Botolan, Zambales, Tata Maca was one of the key farmer leaders who figured in the expansion and consolidation of the MASIPAG network in the early 90s. He was elected as a member of the MASIPAG Board of Trustees from mid-1990s to early 2000s and he was the Area Coordinator for the Central Luzon cluster from 2008 to 2014. Tata Maca then shared his vast knowledge and experience in rice breeding and biodiversity conservation when became the Farm Manager in the MASIPAG National Back-up Farm in Nueva Ecija from 2014 until his retirement  in 2016.

Tata Maca was among the most prolific rice breeder within the MASIPAG network, with some of his farmer-bred lines adapting to different communities.

You will be missed, Tata Maca! You will remain in the hearts of the many farmers that you have served and inspired!