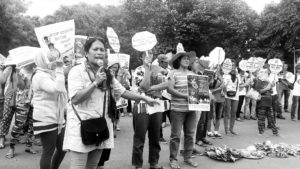 Los Baños, Laguna – Farmer-scientist group MASIPAG’s call to revoke the application to field and feed test Golden Rice is validated after Testbiotech made an analysis on risk assessment made by Food Standards Australia and New Zealand (FSANZ) on Golden Rice. In its critique, Testbiotech concluded that the “application does not show substantial benefits. Furthermore, the risk assessment as performed by FZANZ is not sufficient to demonstrate safety of food derived from GR2 (Golden Rice 2).”

Golden Rice is genetically modified to force the rice plant to produce beta carotene in its grains. Golden Rice is hailed as a solution to help curb Vitamin A deficiency in developing countries. In a dialogue with Philrice this January 2018, the institute said that application for Direct Use and Field Testing is now lodged at the Department of Agriculture – Bureau of Plant Industry (DA-BPI). The said application awaits approval from the DA-BPI for it to commence.

According to the Testbiotech report, the nutritional quality of Golden Rice produced a much smaller amount of carotenoids (3.5 – 10.9 micrograms per gram or ug/g) compared to the original Golden Rice event, which was supposed to produce more than 30 ug/g. “Further, while previous publications identified beta-carotene as having a percentage of around 80 percent of the total carotenoids, the rice in the field trials only reached 59 percent” the report said.

Testbiotech also stated that further significant reduction in the content of carotenoids has to be expected due to storage, processing and heating of the grains in food preparation.

According to Ms Love, the degradation half-life as reported by Schaub 2017, would mean the concentration of beta-carotene after 25 days would be 1.79 ug/g, after 50 days would be 0.89 ug/g and after 75 days 0.45 ug/g dry weight. The abovementioned estimated of amount of rice to be consumed is adjusted for 12.2% to bring the cited 3.57 ug/g dry weight concentration to a fresh weight value, and then allowing for 150% water absorption during cooking. Ms Love has also petitioned the Australian Ministerial Forum on Food Regulation to immediately review the report made by FSANZ.

Testbiotech also stated the Golden Rice is showing genetic instability resulting from crossing to different rice varieties. According to Testbiotech, the expression of transgenes are impacted by varietal background and is dependent on interactions with the environment.

“As what we have said early on, Golden Rice is fraught with inherent problems. One of which is the low yield resulting to the disruption of the native structure of the rice plant” said Cristino Panerio, National Coordinator of farmer-scientist group MASIPAG. Panerio is referring to the recent study made by scientists from India showing that the derived lines of Golden Rice produced abnormality and poor yield performance making it unfit for commercial cultivation.

Farmers are worried that the trait can transfer to other rice varieties or weedy relatives thru cross-contamination once the open field testing is approved. “This will contaminate our indigenous and farmer-bred rice varieties and prove disastrous to the already volatile rice production in the country” added Marcelino dela Rosa, MASIPAG farmer-breeder and rice farmer based in Nueva Ecija.

In its report, Testbiotech stressed the necessity of subjecting Golden Rice to the highest standards of risk assessment before the most vulnerable groups of the population are exposed to it. “However, no toxicological studies were performed with the rice. In the light of the humanitarian claims made in the context of GR2, it is surprising that this application is not based on a full set of data to establish high safety standards” added Testbiotech.

“The government should learn its lesson from the recent Dengvaxia fiasco. The Dengvaxia scandal exposed the inadequacy of government regulation on health, which has put the lives of more than 800,000 school-age Filipino children at risk. As with Golden Rice, it is the vulnerable population, the children aged 1-5 years old and lactating and pregnant women will be the target population,” said Panerio.

Apart from application to field test Golden Rice, Philrice has also applied to feed test Golden Rice to ascertain its efficacy. Details of the said feeding trials are yet to be disclosed, but most probably this will include pre-school children and mothers according to Panerio.

MASIPAG also criticized the move made by IRRI to get approvals from Australia, New Zealand, Canada and the US. “They are getting approvals from countries that are favourable to genetically modified crops, to make it appear that Golden Rice is being accepted in developed countries. They will use the results, such as the one made by FSANZ, to lobby the Philippine government to accept the said GM rice” said Panerio. Recently, MADGE Australia published an open letter addressed to the Minister of Food Regulation Forum to review the FSANZ approval of Golden Rice.

Golden Rice is a patented rice variety owned by agrochemical giant Syngenta, which last year merged with China based company ChemChina. Critics say that Golden Rice is a Trojan horse, which will open the rice industry for more genetically modified rice. Recently, the US Food and Drug Administration approved a new GM rice, named Huahui No.1, paving the way for Chinese GMO product to flood the international market. Huahui No.1 is genetically modified rice inserted with genes coming from the Bacillus thuringiensis bacteria, giving the rice its own toxin to kill rice pests such as stem borers.###

· Testbiotech is a non-profit organization founded as an Institute for the Independent Impact Assessment of Biotechnology in 2008 in Munich, Germany. Testbiotech provides information and scientific expertise on the risks associated with genetic engineering, that is completely independent of the biotech industry. In this way, the organization hopes that their efforts can help strengthen the decision-making competence of politicians and society.

· An Open Letter on GM golden rice in Australia – http://madge.org.au/open-letter-gm-golden-rice-australia

· Molecular and Functional Characterization of GR2-R1 Event Based Backcross Derived Lines of Golden Rice in the Genetic Background of a Mega Rice Variety Swarna – http://journals.plos.org/plosone/article?id=10.1371/journal.pone.0169600