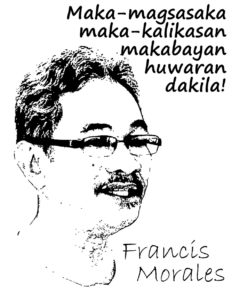 Francis Morales, or Tatay Francis as he is fondly called, has been recognized as one of the country’s environmental defenders by the award-giving body, Gawad Bayani ng Kalikasan (GBK). GBK honors the individuals and groups protecting and defending the environment and peoples’ rights.

“Tatay Francis bravely defended the rights of Typhoon survivors amid media slanting and attacks from government institutions, due to the Barug Katawhan’s organized confiscation of hoarded relief goods in the Department of Social Welfare and Development’s (DSWD) regional office warehouse. Threatened by then Welfare Secretary Dinky Soliman with criminal charges for defending how the “hungry and angry” survivors were justified in the assertion, Tatay Francis retorted with an intense but calm “see you in court”.

He became part of Magsasaka at Siyentipiko para sa Pag-unlad ng Agrikultura (MASIPAG) where he became their advocacy officer before being part of its Board of Trustees. Applying his wide knowledge in sustainable agriculture, he initiated a Resilient Agriculture Program that benefitted the communities affected by Typhoon Pablo and Yolanda. 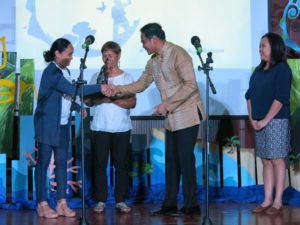 Until his last breath, Tatay Francis was knee-deep in serving the people. He served as the rocj and foundation of the Daluyong Network of Disaster Survivors formed in 2014 in Tacloban City, and unprecedented gathering of typhoon survivors from all over the country.

Tatay Francis’ post-humous award was received by his wife Anita and daughter Raray, who are also development workers pushing for sustainable agriculture.#