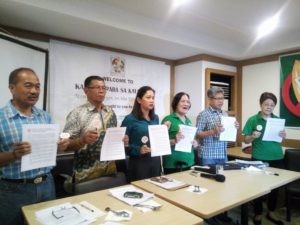 Quezon City – With the imminent threat of a genetically modified rice to the health of women and children, as well as the diversity of local rice varieties, farmers are calling on environmentalists to help launch anew a petition signing campaign to stop the commercialization of Golden Rice. The Stop Golden Rice! Network, RESIST Agrochemical TNCs with Green Convergence discussed the perils and implications of the Golden Rice during the Kamayan Media Forum held April 20 at the Kamayan Restaurant.

Golden Rice has been genetically modified to express beta-carotene, a pre-cursor of Vitamin A, and is being peddled as a solution to Vitamin A Deficiency (VAD) in the Philippines, and other developing countries as well. For almost a decade, farmers’ groups in the Philippines have mounted a campaign to stop the commercialization of Golden Rice, due to safety issues. The potential threat of contamination and loss of rice biodiversity has spurred the farmers to intensify the campaign, culminating in the historic uprooting of the Golden Rice field trials in 2013.

Since then, the Golden Rice proponents have postponed the planned commercialization in 2014, citing need for further studies. In February 2017, however, the International Rice Research Instititute (IRRI) and its local counterpart the Philippine Rice Research Institute (Philrice) has again filed for field trials of Golden Rice, and for the direct use on food, feed and processing as well.

With the direct use applications, consumers are now also at risk, as the Golden Rice can be made available to the public for consumption without the necessary safety tests conducted to determine its possible health effects.

Golden Rice is useless and unnecessary

“The Golden Rice will have irreversible impacts to our health and our environment,” stated Cris Panerio, National Coordinator of MASIPAG and spokesperson for the Stop Golden Rice Network. “The campaign to stop Golden Rice has always been an issue for all the Filipinos and therefore we must all unite against the threat to our staple food.”

“What studies are available right now points out that Golden Rice will be more of a risk than a benefit,”said Dr. Chito Medina, environmental scientist. “In India, rice plants that have been bred with the Golden Rice showed abnormal growth that might affect the farmers’ cultivation. While an independent research body has reported that Golden Rice has very low beta-carotene content, necessitating a consumer to eat 1.6 kg of uncooked rice, roughly 4 kg of cooked rice to get the same amount of beta-carotene in a carrot.”

“Surely, these are grounds alone that Golden Rice is useless, and must be rejected,” said Dr. Nina Galang, Green Convergence convenor. “We already have alternative measures and programs that could address not only malnutrition but also ensure food and environmental safety.”

Even the National Nutrition Council (NNC) has stated during a recent dialogue on Golden Rice that as per data from the Food and Nutrition Research Institute (FNRI), the problem of VAD is declining (or stabilizing) using only the current government program to improve the nutrition status of the Filipinos. 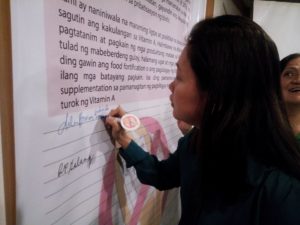 The NNC, along with other government agencies involved with the application of Golden Rice field trials and direct use met with more than 200 farmers, consumers, health advocates, women and youth groups during the Multi-stakeholders Dialogue on Golden Rice organized by the National Anti-Poverty Commission (NAPC) last April 4, 2018. The dialogue sought to discuss comprehensively the implications of Golden Rice and raise concerns on the regulatory processes that govern the application.

“We are sorely disappointed with the responses of the government offices tasked to regulate GM crops. They are unable to give us full assurance that they will favour the welfare of the people over that of the proponents and corporate pushing Golden Rice,” said Antonio Flores of the Kilusang Magbubukid ng Pilipinas (KMP). “We should already learn the bitter lesson from the Dengvaxia fiasco that these technologies and products should be assessed carefully because the consequences are fatal” added Flores.

The SGRN, RESIST Agrochem TNCs along with other organizations are urging NAPC to call on the concerned departments and regulatory bodies to deny the Golden Rice applications for field testing, feeding trials and direct use. The departments include the DA, DOH, DENR, DILG and the DOST. The five departments are tasked under the Joint Department Circular No. 1 of 2016 to ensure the right of the people on health and a balanced ecology are protected from possible impacts of genetically modified products.

“If not for the NAPC, we will not be able to get much information on the status of Golden Rice. However, after the said dialogue, we deem that there is enough basis to reject the application for Golden Rice. We are now seeking the support of the NAPC to urge the government regulators to immediately reject the said crop” said Panerio. “Golden Rice is a farmers’ and consumers’ rights that will affect the Filipino constituents therefore we must urge the government to act in favour of its peoples’ welfare.”

The network will launch anew a petition to stop the field testing and direct use of Golden Rice. The network is gearing to reach more sectors and government institutions to inform them about the application and the possible impacts of the said GM crop to health, environment and the rice industry.#