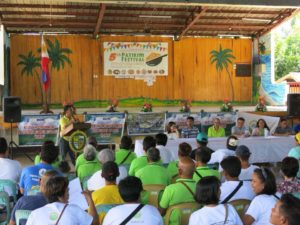 Patikim Festival started in Quezon province through the initiative of the people’s organizations (POs) of MASIPAG in the municipalities of Real, Infanta and Gen. Nakar.

An annual event that started in Real, Quezon in 2013, Patikim serves as an expression of gratitude of the farmers to the organizations that helped them recover from the onslaught of typhoon Winnie last 2004, which caused an avalanche of boulders, logs and soil that buried their farmlands and caused the death of several of their families and community members.

The celebration enjoins more farmers to engage in organic farming. According to Virginia Nazareno of Kiday Community Farmers Association, “Our area is naturally hazard-prone due to its proximity to the Pacific coastline and is frequently being battered by strong typhoons, affecting our crops and livelihood. Organic agriculture has a huge potential to increase resiliency of farmers, thereby increasing their ability to function even when faced with unexpected events such as climate change.” 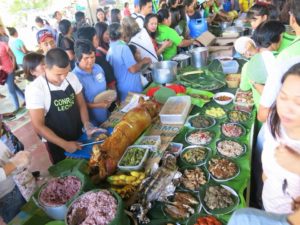 The Catholic Church, through the Social Action Network of Infanta, MASIPAG, as well as local government units and other NGOs, is also involved in the activity. The municipality of General Nakar has also responded to the farmers’ call to strengthen organic agriculture in their municipality. Recently, they passed an ordinance supporting organic agriculture in their area. The municipality of General Nakar is also a member of the League of Organic Agriculture Municipalities and Cities (LOAMC). General Nakar joins all of the municipalities under LOAMC against Golden Rice, a genetically modified rice supposedly aimed at children and women suffering from Vitamin A deficiency. “Our position is non-negotiable on the field testing and commercialization of Golden Rice,” said Hon. Rommel C. Arnado, President of LOAMC-PH in a letter addressed to the National Anti-Poverty Commission during a dialogue with stakeholders on Golden Rice.

Imbued by the spirit of solidarity, the festival symbolizes the aspiration of farmers to be freed from the clutches of transnational corporations that hold the monopoly of seed and technology in maintaining a highly oppressive agricultural system. Patikim Festival is thus more than just a celebration of the farmers’ will to overcome impoverished conditions. It also gestures towards building a welcoming and unifying community of farmers which advocates for natural and organic farming in the Quezon province. #