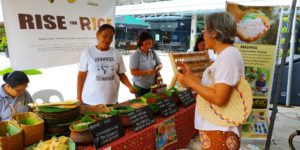 MASIPAG, a farmer-scientist network advancing food security and farmer empowerment through the sustainable use and conservation of local biological resources, believes that with the appropriate policies and technologies, the Filipino farmers can produce enough rice for the country.

“Our MASIPAG farmers are able to produce enough food for their families and communities without the high cost and risks to health,” said Cris Panerio, National Coordinator. “Through diversification of crops, and integration of other agriculture components such as livestock, food becomes secure in the household and in the community.”

Farmers using the organic approach are able to reduce the cost of production since they do not have to buy farm inputs such as seeds, pesticides and fertilizers. Petroleum-based inputs such as fertilizers are subject to price increases add to the burden of the farmers. Chemical products such as herbicides with glyphosate have also been exposed as possibly carcinogenic, and have been banned in other countries.

By making and using of their own inputs in their production, farmers have less exposure to harmful chemicals, and have minimal cost of production. Meanwhile, consumers can enjoy healthier farm produce at a reasonable price. Organic, sustainable production likewise emphasizes the practice of diversifying the farm to include a wide variety of crops and livestock which assures the balanced diet of the family, especially the women and children.

At the Rise for Rice event led by MASIPAG, various products from the small-scale producers were made available, such as colored rice, vegetables and processed products such as cassava chips and herbal teas. Lively discussions about organic production, as well as the issues that affect the farmers and consumers are discussed, such as the genetically modified Golden Rice.

By establishing local farmers markets, producers are able to set their own fair pricing system that is just to both to them and the consumers. Even the organic rice, which sells at Php 90 per kilo at the least, can be sold as low as Php 60-70 per kilo. Aside from the minimal production cost, there is also a reduction in the transportation cost of the products which has been affected by the unmitigated oil price increases. This also means low carbon foot prints for the farmers’ products.

Meanwhile, the Dept of Agriculture (DA) has been coming up with stop gap measures to supposedly address the price inflation of basic commodities, including rice. Recently, it was announced that the DA will be enacting a policy imposing suggested retail price (SRP) for rice, fish, garlic and onion among others, despite having price control laws that are already existing.

“It is not enough the DA set and monitor the prices, because the inflation is significantly caused by the TRAIN Law,” said Virginia Nazareno. “This is what we should address to ensure that our ordinary consumers can have access to safe and healthy food and curb hunger and malnutrition.”

Change the policies to achieve sufficiency

While organic farmers are able to achieve food security locally, the national policies and government direction itself makes it hard to achieve self sufficiency.

“The President himself has stated that this is due to the shrinking agricultural land and the cash crop approach,” said Panerio. “If the government wants to seriously address food security and self sufficiency, then land should be distributed to the farmers, land conversion should be halted, and monocropping should be stopped.”

“The lack of government support is driving farmers away from agriculture,” said Lanie Guavez, a farmer from Camarines Sur. “Who then will feed the country? Shall we only rely on imports or hybrid and genetically modified products?”

“We implore the government to heed the farmers’ and consumers’ call to change the agricultural policies such as the promotion of chemical inputs, hybrid and genetically modified seeds, conversion of farmlands to monocrop plantations and other non-agricultural use”.

We should get out from trade agreements that perpetrate export-orientation and import-dependence and instead focus on developing and improving sustainable food production systems locally and nationally.

Through these necessary changes can we genuinely achieve food security and self-sufficiency, and assert our food sovereignty,” said Panerio. #