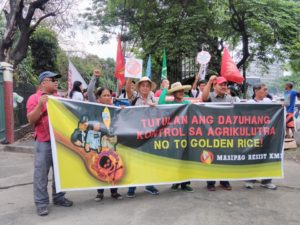 The recent US Food and Drug Administration approval of Golden Rice this May is the third safety stamp garnered by IRRI following Australia, New Zealand and Health Canada. In 2017, the International Rice Research Institute (IRRI) filed application for safety approval and trade liability clearance of Golden Rice despite not being intended for distribution in developed countries. Corporate proponents claim it is a win that will usher Golden Rice release in Asia, particularly Philippines, Bangladesh and Indonesia. However, strong and broad global opposition proves otherwise.

According to Stop Golden Rice! Network, “The US Food and Drug Administration (FDA) conclusion “that the level of beta-carotene in Golden Rice is too low to warrant a nutrient content claim” reflects the failure and futility of GMO Golden Rice to address malnutrition and Vitamin A Deficiency (VAD). The report adds no credence to the already soiled corporate narrative that bio-fortified GMOs exist to address hunger and malnutrition. The report is but a nail to a coffin signaling that nothing more than greedy corporate profit agenda drives the strings of deceptions and humanitarian myths revolving around this unwanted, unnecessary and useless yet over-hyped bio-fortified GMO”.

The network added that clearly US FDA’s conclusion is tantamount to admission that billions of dollars invested into Golden Rice development, promotion and intended release of Golden Rice were unnecessary and nonsensical. Further, farmers and consumers have access to more diverse natural, safe,nutritious, and Vitamin A rich foods which have significantly addressed local malnutrition and VAD problems.

Golden Rice: a looming threat, not a solution

A global coalition of civil society advancing food sovereignty denounced these foreign safety certifications reiterating that “We believe that the recent approvals of Golden Rice in the US and other rich countries are meant to influence or put additional pressure on regulatory bodies in developing countries to follow suit – especially in the Philippines and Bangladesh where IRRI’s application for Golden Rice remains pending and is strongly being challenged. It is ironic that the US , Australia, New Zealand and Canada that will not host field trials or actually produce and consume Golden Rice – are the first to give their nod. These countries will bear the lowest risks and impacts compare to target countries”.

A legal loophole in the Philippines stipulates that once commercialized in foreign countries and approved by international regulatory bodies, the application for direct use may commence despite ongoing national deliberation. This includes importation, consumption and launching of clinical feeding trials among children and women. IRRI is trying to bring Golden Rice into Philippines through this ‘backdoor method’, despite local administrative and people’s opposition. This brings us to the crucial question: whether IRRI is a public institution or further extension of corporate agenda and private profits? We would like to remind that Golden Rice proponents have been involved in unethical Golden Rice feeding scandal in China last 2009 to 2012 and holds no scientific legitimacy. Such violation should not be repeated in the Philippines.

The US FDA report was reviewed by independent scientists and noted that it acknowledged Schaub, et.al, 2017 findings on the degradation half-life of Golden Rice – meaning it retains 60% of its original beta-carotene levels after 3 weeks of storage and just 13% after 10 weeks. US FDA did not addressed lack of transparency, genuine public participation, actual safety evaluation, encompassing and sound scientific review which were raised during the past FSANZ and Health Canada approval. Since last year, TestBiotech already raised the issue of low nutritional viability, genetic instability and encompassing scientific review. A study by Bollinedi, et al, 2017 also revealed scientific findings on the threat of irreversible genetic contamination posed by open field trials and propagation of Golden Rice. Regulatory bodies have also turned a blind eye to the evident overwhelming and sharp public scrutiny and civil society opposition at the country level, especially in pilot countries Philippines and Bangladesh.

The push for GM Golden Rice release in Asia is linked with the current aggressive moves of merging giant biotech corporate oligarchs – Monsanto-Bayer, Dow-Dupont and Syngenta (now ChemChina) to consolidate global corporate monopoly control of seeds and commodity food chains through GM corn, soya, cotton – and now rice. Previously, GMO crops were meant for feed and processing for industrial purposes and not direct consumption. This could change with GMO Golden Rice, which is a staple food for millions. It will be impossible to monitor and regulate the threat of contamination promised by Golden Rice as a GMO because of extensive consumption and global trade.

According to GRAIN, an international organization working to advancing community controlled and biodiversity based agriculture, Golden Rice is the first generation of biofortified GMO crops and its approval will pave the release of other GM rice and biofortified GM crops. Encroachment of GMO rice will virtually succumb a third of the global food system under corporate reigns with Syngenta/Chemchina and Monsanto/Bayer leading the rat race.

To counter these foreseeable threats, the Stop Golden Rice Network recently launched an international campaign last April 2 to 4, 2018 in the Philippines to build a broad and strong global opposition to hamper its intended released early this year. SGRN is a pan-Asia network of more than 40 organizations from 12 countries opposed to the commercialization of Golden Rice and other forms of genetically modified crops. The network advances farmers rights to seed, land and resources; livelihood and food sovereignty; sustainable and ecology-based agriculture.

The network reiterated that “The recent US FDA as with the previous FSANZ and Health Canada approval are checklists of corporate lobbying and glaring lack of genuine regulation. Public action and vigilance is key to safeguard our rights to health, environment and safe food. This will not deter two decades of successful global opposition against Golden Rice which have impeded its release in Asia. Instead, these approvals add imperative to our global campaign call to liberate our land, farmers and food systems from the control of corporate greed, GMOs and toxic products in order to truly address the roots of malnutrition, hunger and poverty.” #