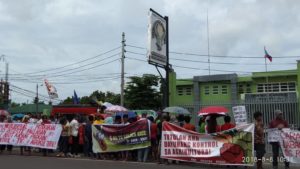 August 8 – Five years ago today, more than 400 farmers, women, youth and consumers uprooted the secret Golden Rice field trials in Pili, Camarines Sur, decisively showing the rejection of the people against the genetically modified rice. The historic action has resulted to increased awareness and renewed debate globally and has driven the International Rice Research Institute (IRRI) to postpone the commercialization slated in 2016 supposedly due to the lower yields of the Golden Rice.

In 2017, proponents IRRI and the Philippine Rice Research Institute (Philrice) have again filed for application for another round of field trials in in Munoz, Nueva Ecija and San Mateo, Isabela. Additionally, they filed an application for direct use for food, feed and processing, which will pose health risks among the consumers as the Golden Rice can be made available to the public for consumption without the necessary safety tests conducted to determine its possible health effects.

“Then and now, the Golden Rice remains an unnecessary crop that will only render farmers and consumers vulnerable to possible health and economic risks,” said Cris Panerio, National Coordinator of MASIPAG. “There is still a glaring lack of reliable and independent studies to determine the long-term effects of this genetically modified rice.”

Golden Rice was genetically engineered to express beta-carotene, a pre-cursor to Vitamin A, to supposedly combat Vitamin A Deficiency (VAD) among children and mothers particularly in developing countries such as the Philippines. However, even the US Food and Drug Administration (US FDA) has stated that “the level of beta-carotene in Golden Rice is too low to warrant a nutrient content claim” thus reflecting the failure and futility of Golden Rice to address malnutrition and Vitamin A Deficiency (VAD).

Aside from its low content, the beta-carotene in Golden Rice also shows degradation. A study in 2017 shows that Golden Rice retains 60% of its original beta-carotene levels after 3 weeks of storage and just 13% after 10 weeks. A researcher notes that after 75 days, one has to eat as much as 32 kgs of cooked Golden Rice just to get the same amount of beta-carotene in a single carrot.

Meanwhile, a study in India showed that when bred with the local Swarna variety, the Golden Rice shows phenotyphic abnormalities, stunted growth and low yield, virtually adulterating the metabolic and genetic traits of the variety. This shows the genetic instability of the GM rice which will definitely cause further problems at the farmers’ fields and in rice production in general.

Despite these issues, regulatory bodies in the US, Canada, Australia and New Zealand have given their approval to grant safety stamps and trade liability clearance for Golden Rice. These rubber stamps of Golden Rice is now being used by the proponents to circumvent public opposition and hasten release of Golden Rice in target countries including conduct of clinical feeding trials among women and children in Philippines and Bangladesh.

“We deem these approvals as a result of bias to corporate lobbying, a travesty of justice and blatant violation of our sovereign rights,” said Panerio. “Golden Rice is bound to fail, and it does not make sense to hastily approve it for field trials or direct use when it inherent issues remain unresolved.”

The Golden Rice uprooting in Bicol has become a symbol of resistance against GMOs and corporate control in agriculture. Farmers and consumers groups continue to be inspired by the Filipino farmers not only in its decisive actions and campaigns, but also in the advocacy for better alternatives to food security.

“The solution to a complex problem such as hunger and malnutrition should likewise be comprehensive,” said Margie Lacanilao, a farmer from Nueva Ecija. “VAD is addressed by eating diverse and healthy food such as green and leafy vegetable and fruits which have higher beta-carotene than Golden Rice.”

“To be able to have diverse sources of food and nutrition, we need a farming system that encourages diversification and sustainability. We also need our land and our local seeds to ensure a healthier and more sustainable farming system” added Lacanilao.

Farmers and various sectors in Isabela, Nueva Ecija and Bicol have gathered together to commemorate the historic Golden Rice uprooting. In Isabela, a multi-sectoral forum will be conducted in San Mateo to appeal to the local government not to approve the field trial. In Nueva Ecija, an organic food festival will be held to showcase the diversity of Vitamin A-rich food that are better solutions to Golden Rice. Bicolano farmers will be holding a caravan to support the farmers in Isabela and Nueva Ecija and to drumbeat other issues affecting the agriculture sector in general.

Global partners in Bangladesh, Indonesia and Cambodia will also be conducting parallel activities in their respective countries to express their opposition against Golden Rice.

“We urge our regulators, as well as our local governments in San Mateo, Isabela and Munoz, Nueva Ecija to consider carefully all the issues before deciding on the field trials. We likewise demand the Bureau of Plant Industry to address all the issues first before proceeding to field testing Golden Rice,” said Panerio.

“We will continue to voice out our opposition against Golden Rice,” said Cita Managuelod of DAGAMI- Isabela. “And like the Bicolano farmers, we are willing to do whatever it takes to stop the Golden Rice field trials.”#