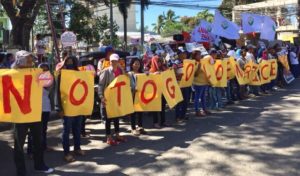 November 7 –Farmers from various provinces of Luzon met the 33rd anniversary of the Philippine Rice Research Institute (Philrice) with protest in Munoz, Nueva Ecija and a resounding call to halt the impending field trials of Golden Rice. The rice, genetically modified to express beta carotene to supposedly combat the worsening cases of Vitamin A Deficiency has been applied for field testing and direct use for food, feed and processing with the Philrice as the project leader. Claiming that they have complied with the regulatory requirements, including the approval from the Sanggunian Bayan, the field trials are expected to commence this November.

However, farmers and various consumers groups remain concerned that issues on health and environment safety have not been fully addressed, and are calling for moratorium on the impending field trials.

“We are calling on our local leaders in Munoz, Nueva Ecija and San Mateo, Isabela to reconsider the Golden Rice field trials until the farmers and the people have the full assurance of its safety,” said Cris Panerio, National Coordinator of MASIPAG. “Until now, there have been no reliable, independent safety studies about Golden Rice.”

Panerio added that the field testing that the Philrice will conduct will only look at the physical and agronomic traits of the GM plant. “Even with the existence of the regulatory policy that includes the Dept of Health, it remains to be seen if they indeed have the capacity to test for safety of Golden Rice to humans.”

Farmers from MASIPAG and other organizations including the Alyansa ng Magbubukid sa Gitnang Luzon (AMGL) and DAGAMI will troop to the local government of Munoz, Nueva Ecija and San Mateo, Isabela bearing petition letters calling for the field trial moratorium.

“Our rice industry is in crisis because of the neoliberal policies that favors the interest of huge corporations,” said Joseph Canlas, secretary-general of AMGL. “Philrice is likewise guilty of putting the corporate interest first instead of coming up with a comprehensive solution to address rice productivity and safety.”

“It is quite alarming that our Filipino rice scientists are willing to expose rice, our staple food to a technology that has low potentials but high risk,” said Joel Bacdayan, MASIPAG farmer from Gabaldon, Nueva Ecija.

Recent studies have shown that traditional rice in India showed stunted growth when bred with Golden Rice, thus affecting their productivity and yields. Meanwhile, a study by Schaub, et al showed that the latest version of Golden Rice, the GR2E has very low beta carotene content which was likewise noted by the US Food and Drug Authority (US FDA).

Golden Rice, a tool for control

Why does Philrice still promote Golden Rice when it can cause stunted plant growth and has in fact low beta carotene content?

MASIPAG believes that Golden Rice is being heavily pushed despite the availability of local food that have higher beta carotene content because of its role to ease the public into accepting genetically modified food. “Once Golden Rice has been commercialized and the public have been conditioned into accepting and consuming it, then other GM foods are sure to follow,” said Panerio. Already, reports abound of other GM food in the pipeline such as Golden banana, Golden Potato, purple antioxidant rice and GM zinc and iron-fortified rice.

“If we allow Golden Rice in our fields and our tables, we might lose our traditional rice and local foods,” said Lorna Ganaba, a MASIPAG farmer from Kalinga. “The Golden Rice issue is not only about science or research as Philrice says, but it is an issue that can impact indigenous culture and identity.”

Isabela is among the provinces that widely adapted and propagated GM corn, the first GMO introduced and propagated in the country. However, experiences have shown that GM corn failed to improve the poor farmers’ lives. A 2012 research on the socio-economic impact of GM corn in the country shows that poor farmers are driven to indebtedness due to the high cost of GM corn production. Farmers incur as much as Php 19000 negative net income in a particularly bad season, which they will try to augment by borrowing more money from exploitative financers.

“Our bitter experience with GM corn has cautioned us against another genetically modified crop,” said Cita Managelod, a leader from DAGAMI. “What we need right now are concrete support and mechanisms to protect our farmers such as in times of disasters and crises.”

Farmers and consumers groups from Isabela also held a protest action in November 6 at the Philrice San Mateo station, one of the Golden Rice field trial sites.

“We have to learn from these bitter experiences that GMOs will not address poverty and hunger among farmers and consumers,” said Panerio. “Poverty and hunger are complex issues that need comprehensive solutions such as genuine agrarian reform, and farmer-centered technologies that will improve rice and food production so that our children and our people can have access to safe, nutritious and affordable diverse food.” #