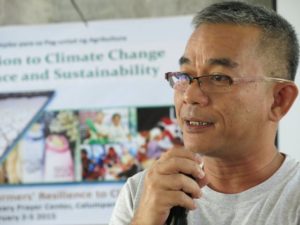 “They tried to bury us. They did not know we were seeds. – Mexican proverb”

The Magsasaka at Siyentipiko para sa Pag-unlad ng Agrikultura (MASIPAG) strongly condemns the murder of Atty Benjamin Ramos, peoples’ lawyer and advocate for farmers’ rights and farmer-led development. Atty Ben is one of the most recognizable leaders of MASIPAG (through his NGO Paghida-et sa Kauswagan Development Group or PDG) having served as member of the Board of Trustees (BOT) from 1998-2016. As BOT member and legal consultant, he helped develop the network’s policies and ensure that MASIPAG’s farmer-led principles are upheld. Atty Ben staunchly promoted farmers’ rights to land, seeds and technology.

Atty Ben was gunned down by two unidentified men riding in tandem around 10pm in Kabankalan City on November 6. He has long been under military surveillance because of his involvement with land dispute cases, environmental and human rights issues. Last April, Atty Ben was among the mass leaders and development workers in Negros who were tagged as members or supporters of the CPP-NPA-NDF.

MASIPAG has consistently denounced this malicious red-tagging of Atty Ben, along with other farmers and leaders who are only fighting to reclaim what is theirs – land from the landlords, seeds from corporate control and technology from corporate-biased research institutions. For years, Atty Ben has helped mold the policies and principles of MASIPAG that put the interests of the poor farmers front and center of our sustainable agriculture programs. As one of the founding members of MASIPAG in the Visayas region, PDG as headed by Atty Ben, instituted and embodied the farmer-led development, a development paradigm that is now being recognized and echoed in many organizations in and outside of the country. Atty Ben believed in the agency and capacity of the farmers to uplift themselves from poverty and food insecurity and helped raise their consciousness to their plight and what they could do to free themselves from landlessness, poverty and dependence. Many of the farmers he helped were once daily-wage sugar plantation workers who after MASIPAG and PDG intervention have shifted to sustainable and organic agriculture.

Atty Ben was a true servant of the masses. His death is a terrible loss to all the peasants and organizations that he has worked with, including MASIPAG farmers and NGOs from all over the country. He is gone, but we will continue to honor his legacy and draw strength and inspiration from his selfless service to our farmers.

We condemn the brutal killing of Atty Ben! We demand that justice be served for him and all the victims of extra-judicial killings! #