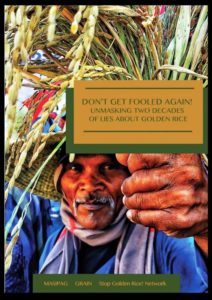 Almost two decades have passed since the biotechnology industry launched its work to create Golden Rice, a genetically modified crop allegedly meant to combat malnutrition. Yet it still has not been commercialised anywhere in the world. A new report from GRAIN, MASIPAG and the Stop Golden Rice! Network sheds light on the flaws and failures of Golden Rice and unmask the question whether the world really needs Golden Rice or is it another seed industry’s public relations efforts in favour of Genetically-Modified (GM) crops.

Golden Rice continues to be hailed by its proponents as a panacea to cure Vitamin A deficiency. But evidence has shown that Golden Rice has much lower levels of beta-carotene, the precursor to Vitamin A, than sweet potatoes – an abundant and natural source of Vitamin A that can easily found in all the target countries for Golden Rice commercialisation. Further, more than half of the level of beta-carotene in Golden Rice is known to decline while in storage. Unsurprisingly, the recent safety approval of Golden Rice by the United States Food and Drugs Administration (US FDA) came with an explicit note saying that the level of beta-carotene in the rice is too low for it to be presented as particularly nutritious.

Meanwhile, target countries for the commercialisation of Golden Rice like the Philippines and Bangladesh have managed to lower their respective Vitamin A Deficiency levels over the years through dietary improvements and other methods which are more cost-effective and proven to be safe.

The pro-Golden Rice camp is seen as peddling a GM product that is not tested nor proven to be safe, and using it as a Trojan horse to open the door to other genetically-modified crops and livestock.

“Golden Rice is a techno-fix to malnutrition and a corporate ploy to control our agriculture,” says Cris Panerio of MASIPAG. “Asian people and the rest of the world do not need Golden Rice.” Indeed, the solution to hunger and malnutrition lies in comprehensive approaches that ensure people have access to diverse sources of nutrition. Securing small farmers’ control over resources such as seed, appropriate technologies, water and land is the real key to improving food production and eradicating hunger and malnutrition.

The report is available in http://www.grain.org/e/6067