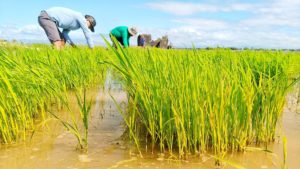 Los Banos, Laguna – Farmer-scientist group MASIPAG joins the national indignation against the recent signing into law of the Rice Tariffication Bill. MASIPAG believes it will be the nail to the coffin of small farmers and the rice industry and will not solve food insecurity in the country.

Despite being an agricultural country – famed for the rice terraces in the North, and host to the International Rice Research Institute (IRRI) – the Philippines has become one of the top rice importers, importing rice from neighboring countries such as Vietnam and Thailand. This is part of the country’s obligation under the World Trade Organization (WTO) whose trade agreements impose the opening up of the domestic markets for goods and services from other member countries. However, far from improving the conditions of the farmers, and uplifting the sector, agricultural liberalization managed only to achieve the opposite. Under the new law, the quantitative restrictions of importing rice will be replaced by a tariffication system of 35% (grains from Southeast Asia) or 180% from non-ASEAN World Trade Organization (WTO) members. The QRs serve to set a limit to the volume of imported rice, and as such serve to protect the poor farmers from the uneven competition. With the passing of the law, the deluge of cheap, imported rice will spell disaster for the resource-poor, small-scale farmers who are already suffering from dismal production, low farmgate prices and lack of appropriate support from the government.

Yet, instead of providing the necessary support to the Filipino farmers to be able to increase production and level the playing field, the government continues to shirk away from its responsibilities in ensuring rice self-sufficiency and food security. The President himself has been previously quoted saying that the country can never achieve rice self-sufficiency while the agriculture department has ventured into rice production in Papua New Guinea.

Food security has always been problematic in the Philippines. With chemical-based agriculture as the dominant production system, farmers are trapped in a cycle of expensive production cost and unpredictable yields. They cannot rely on the government, through the National Food Authority (NFA) to buy their yields at a fair price. The agriculture sector is also always vulnerable to natural disasters such as typhoons, floods and drought making it more difficult for the farmers to produce enough food. Food insecurity is made worse for both the producers and the consumers with the systemic corruption and supposed existence of the rice cartel controlling the market prices of rice.

The complexities of food insecurity cannot be addressed by rice tariffication, in fact it will further worsen. The Php 4-7 supposed decrease in price will not matter much since other basic food and goods are heavily taxed. To ensure the affordable cost of rice, the government should provide ample and appropriate support for the farmers. For comparison, the government support provided for farmers in Vietnam amounts to USD 1.1 billion, while in Thailand, the agriculture sector receives USD 4.4 billion. Meanwhile, Filipino farmers only received USD 190 million for support, and with the decrease in role of the National Food Authority (NFA), farmers will be at the mercy of private traders. There is no guarantee of a reliable supply of cheap, imported rice since governments of Vietnam and Thailand can implement a ban on exporting rice, as was the experience in 2007-2008.

Addressing food security will need a comprehensive solution, starting from junking the law that removed the quantitative restrictions and allows for rice tariffication. Conversion of agricultural lands to commercial and industrial uses should likewise cease, and instead let these agricultural lands be used for staple food crops for the Filipinos. Small-scale, resource-poor farmers will also benefit more from using sustainable agricultural production where they can save from inputs by using their own local seeds and developing their own organic fertilizers and pesticides.

We urge the government to repeal the law on rice tariffication and focus instead on the genuine development of the rice industry. MASIPAG farmers’ experience show that rice self-sufficiency can be achieved using sustainable and appropriate technologies such as sustainable agriculture. We likewise call for the immediate resolution to the land struggles suffered by small-scale farmers over the country — only when farmers have access and control over this resource can we truly attain food security. #