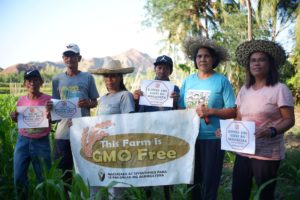 On the occasion of World Consumers Day, farmers, scientists and consumers challenged the national government to promote safe, sufficient and affordable food by repealing the Rice Tariffication law and stop the planned commercialization of GMO Rice or Golden Rice. Farmers, who are consumers as well, will bear the brunt of these new policies and programs in the rice sector.

As a response, farmers in Luzon, Visayas and Mindanao declared their farms GM Free by setting-up signages in their plots and gardens. It is hoped that more farmers and consumers will follow suit by declaring their farms GM Free due to the possible introduction of Golden Rice, a GM crop slated for commercialization in the country. Farmers and consumers are also gearing up for the possible impacts to rice price and incomes brought about by the unlimited importation of rice from other countries.

Last July 18 and 20, 2018, a public consultation was held at the City of Muñoz, Nueva Ecija and San Mateo, Isabela wherein Philrice has asked for the Local Government Unit for the approval of the field testing of the said GM crop in their areas. Golden Rice is genetically modified with genes from bacteria and corn for the crop to produce beta carotene. Proponents said that Golden Rice will be used to address Vitamin A deficiency among women and children.It is now geared to be made available to farmers and consumers.

However, questions on safety, efficacy and necessity of Golden Rice are persistent. Despite the agrochemical industry, IRRI and the Golden Rice proponents’ claim, the safety of genetic engineering remains disputed with negative experiences from laboratories, people’s health and farms are piling up.

Mr Cris Panerio, National Coordinator of Farmers and Scientist for the Development of Agriculture (MASIPAG), pointed that because Golden Rice is genetically modified, it may produce unintended effects to those who will eat it. “No independent safety test was done to first establish its potential for allergenicity or toxicity. Worse, to determine if Golden Rice will deliver Vitamin A, efficacy tests will be conducted among the Filipino women and children after Golden Rice is approved by government regulators.”

Kilusang Magbubukid ng Pilipinas (KMP) slammed this law. In a press statement, the group said that the law “is equivalent to death sentence for the local rice industry and rice farmers. The law will directly affect 13.5 million palay farmers and their families, 17.5 millon farm workers, 20,000 rice retailers and more then 10 million Filipinos consumers dependent on NFA rice.” While the government promises for cheaper rice, the Php 27 per kilo of rice being sold by the NFA will be phased out leaving consumers at the mercy of the unstable rice price in the market.

Unsafe, patented food, and neoliberal measures is aggressively forcing their way to settle in the county amid the strong and growing community resistance from farmers, consumers and many other groups. Panerio said, “widespread poverty continues to be a big problem in the country and Filipino children continue to be afflicted by various forms of malnutrition. We need a viable agriculture program to address this problem”. Panerio also added, “by developing resilient and bountiful food-production system based on sustainable agriculture is one way to food security. Thru sustainable and organic agriculture production, farmers can benefit from this thru lesser costs in inputs and seeds. Local marketing and processing of products also increases farmers incomes. However, resources such as land, seed, water and appropriate technologies are needed for food security to be achieved. The Philippines should also consider its stand on the World Trade Organization – Agreement on Agriculture’s prescription on our agricultural policies and programs.”

Continuous protest actions are planned to prevent the commercialization of Golden Rice and to junk the Rice Tariffication Law.

Photos of farmers in their GM-Free Farms can be found here, here and here. ##