Quezon City – Around 150 farmers, scientists and NGOs from Luzon, Visayas and Mindanao gathered together for a week-long series of activities that raised the call to address the current rice crisis and stop the attacks on farmers and development workers that are vital in the realization of food security in the country.

From April 2 to April 6, MASIPAG members, along with partners and friends exposed the various challenges that farmers and food producers all over the country are facing, including persistent landlessness and the vicious attacks to peasants and farmers. MASIPAG likewise condemned the Rice Tariffication Law, believing that it will cause the downfall of the local agriculture sector, particularly the rice producers, from the onslaught of cheap, imported rice. It is expected also that that this deluge of imported products might include possibly unsafe genetically modified rice that will be made available to the consumers. 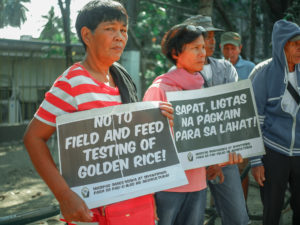 MASIPAG along with its allies likewise hit the International Rice Research Institute (IRRI) and its relevance to the Filipino small-scale farmers. IRRI was established in the 1960s to supposedly bring development to the agricultural production in the Philippines and Asia. Yet, from the high-yielding varieties to the genetically modified Golden Rice, their technologies still fail to address the most basic problems of the poor farmers.

Farmers are also currently facing worsening drought, a manifestation of climate change that will also kill off the farmers and the industry. Already, more than Php 4 Billion pesos worth of damages were reportedly incurred with the onset of drought in many agricultural areas.

Hope in the Hands of the Farmers 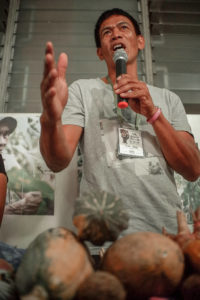 Despite this bleak reality, a farmers-scientists network remain committed to promoting alternatives that will improve the agricultural productivity of resource-poor farmers and protect the peoples’ rights to safe food and balanced environment.

The week-long series of activities showcased not only these programs and practices on sustainable agriculture, farmer-led research, climate change resiliency and farmer empowerment, but also to express their solidarity to farmers, human rights defenders and development workers who work tirelessly to achieve food security and protect the country’s food sovereignty.

The following activities were held to much success:

APRIL 2: Book launching of Stories of Struggle: Experiences of Land Reform in Negros Island
Written by researchers and academician from Australia and the Philippines, the book features the experience of farmers assisted by theorganization of Atty Ben Ramos, the slain human rights defender. 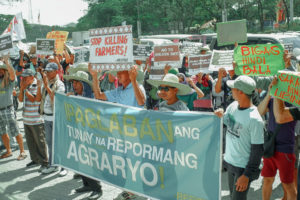 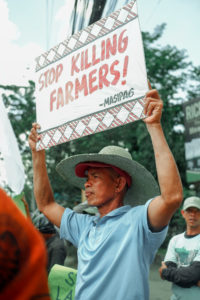 APRIL 4: Mass Action against IRRI and the rice crisis
Farmers trooped to protest against the rice crisis and IRRI (International Rice Research Institute), which was celebrating their 59th anniversary.

During the GA, a new set of Board of Trustees (BOT) was elected with the following results:

Among the highlights of the GA included the tribute to MASIPAG leaders and farmers who passed away, including Atty Ben Ramos and BOT member Marcelino Dela Rosa. A solemn seed exchange was also held, which was made more meaningful with the blessing officiated by Misereor Chairman Archbishop Stephan Burger. #