Munoz, Nueva Ecija – Farmers, women-leaders and development workers from Munoz and other parts of Nueva Ecija has called on the City Council of Munoz to review its previous approval for the Golden Rice field trials and ensure the safety of the people and the environment first.

In 2018, previous members of the City Council has released a resolution approving the field trials of the genetically modified rice inside the station of the Philippine Rice Research Institute (Philrice) in Munoz. Philrice is lead proponent of the Golden Rice project, also known as the Healthy Rice project. However, farmers and consumers remain wary of the GM rice that is supposed to address Vitamin A Deficiency (VAD) in the country. 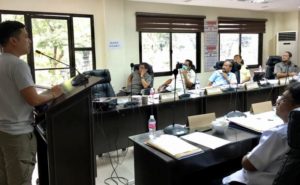 “We are asking the newly-elected officials among the City Council to study the matter and reconsider the previous resolution,” said Alfie Pulumbarit, MASIPAG Advocacy Officer. “Golden Rice is still fraught with issues that seriously question its viability and long-term impacts.”

Among these issues include the low beta-carotene content of the Golden Rice, which degrades quickly after harvesting and processing of the rice. These were indicated in a recent study from India, that also states that Golden Rice has to be ‘vacuum-packed’ and refrigerated so that it can save at least 50% of its beta-carotene content. Previous studies from India also showed that local rice crossed with the Golden Rice did not develop fully and suffered from lower growth and production.

This is an alarming case for the farmers, especially in Nueva Ecija who are already suffering from the effects of drought, as well as the effects from the low buying prices of palay related to the recently signed rice tariffication law.

Rafael “Ka Paeng” Mariano, former Dept of Agrarian Reform Secretary, called on the City Council members to look out for the interest and welfare of their constituents and the Filipino farmers. The field trials in Munoz will likely to have ramifications among rice farmers in the country, not only Nueva Ecija.

The City Council committed to review the resolution at the soonest possible time.

After the dialogue, the group trooped to the public market for a short program highlighting the results of the lobbying, as well as express the other issues hounding the farmers of Nueva Ecija, including the effects of the rice tariffication law.

The dialogue-lobbying is part of a week-long activity in the Philippines and in other parts of Asia to commemorate the 6th anniversary of the historic Golden Rice uprooting in Pili, Camarines Sur in August 8, 2013. The uprooting has been among the highlights of the movement against Golden Rice and other genetically modified organisms that continue to inspire farmers and networks around the world in resisting GMOs and other corporate interventions in agriculture. #