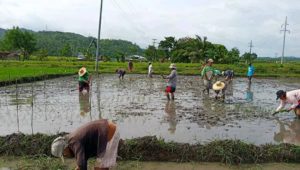 “When I give food to the poor, they call me saint. When I ask why the poor have no food, they call me a communist.” – Dom Helder Camara

MASIPAG condemns the malicious tagging of various legal and development organizations in the recently held series of forum by the 303rd Infantry Brigade in universities and colleges in Bacolod City, Negros Occidental. We are appalled that the Armed Forces of the Philippines (AFP) and the Duterte administration are frantically obsessed with their baseless and unjust attack on development organizations and farmers groups, and their campaign against alleged massive recruitment by NPA in colleges and universities in the country.

Among those organizations vilified by the 303rd IB is the Paghida-et sa Kauswagan Development Group (PDG), a non -government organization that has been providing support services to small and resource-poor farmers in Negros Occidental.

PDG is a long-time partner of MASIPAG and is among the leading organizations mainstreaming organic and sustainable agriculture in the Province of Negros Occidental. PDG has been serving at least 200 poor communities since its foundation in 1987, driven by its commitment to empower farmers to uphold their rights to land, seeds and technology to achieve food security and sustainable livelihood. Over the years, PDG has earned recognition and support from various international organizations for their enormous impact on the lives of the small farmers and their communities. PDG has assisted agrarian reform beneficiaries in their land acquisition efforts under the comprehensive agrarian reform law, most of whom are locked in legal struggle with the big landlords that refuse to recognize the farmers’ legitimate rights to land.

MASIPAG deplores the lies and malicious tagging of PDG and community leaders. The Negros Island, considered as the hacienda capital of the country, is now a living nightmare beyond belief, where 88 individuals, most of whom are ordinary farmers, have been murdered this year. Last year, it can be recalled that months before his brutal killing, Atty. Ben Ramos, PDG’s Executive Director and former Board member of MASIPAG, was maliciously tagged and vilified by the AFP and PNP through posters with his photo hung in public places.

Aside from systematic killings, farmers and communities are being harassed through blatant surveillance designed to sow fear and submission among the people. Working in the farms alone early in the morning has become a trying exercise as farmers are not assured of their safety. MASIPAG is enraged that farmers who are producing food for us all, as well as other innocent civilians fall victims to mindless and atrocious extra-judicial killings.

We call on President Rodrigo Duterte to call off and stop these attacks to development organizations and farmers’ groups and instead, support their efforts in serving the poor towards genuine and sustainable development. ###